CHRISTIAN SYMBOLS AND THEIR MEANING 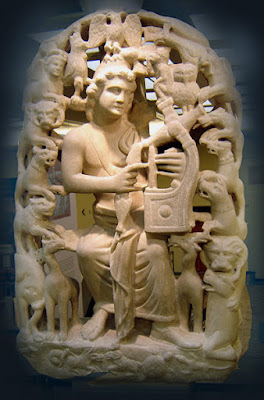 The human need for divine communication, the need to feel the divine nature close to him/her and thank it, existed right from the beginning of human existence and was expressed not only through worship and prayer, but through art as well.

Therefore, in all eras and in all religions man created works of art deserving admiration, such as the enormous Ziggurat (a kind of pyramid) in ancient Mesopotamia, the Temple of Solomon in Israel, the Parthenon in ancient Greece, the Taj Mahal in India and so on so forth in an endless list of any kind of art.

Even when some kinds of art are considered forbidden in his/her religious beliefs, man contrives means to overcome this prohibition or creates new kinds of art to stay loyal to this prohibition. For instance, when a Muslim artist wants to portray the prophet of Mohammend – something forbidden for Islam – he thinks up the following solution: he paints the whole body of prophet Mohammend but leaves the face blank. Similarly the ban on divine illustration does not stand in the way of his artistic expression and he creates the famous ‘arabesque’ which adorn his mosques and temples.

In the same way, early Christianity for fear of drifting into idolatry – since as we all know the majority of its faithful derived from idolatry – avoids portraying God. However, the faithful of that era had the dire need to be expressed through Art, and that need was so big that it could not be supressed in any way. So, the early Christian resorts to symbols through which he/she tries to express the most profound thoughts of his/her faith. Besides, that’s the reason why they neglect naturalness and three-dimensional reality when they draw these symbols and acquire painting of slight moves in order to show off the concept of the supernatural world. In addition, resorting to symbols has one extra reason, the fact that with symbols and allegory early Christians try to cover up the concepts of their faith which was persecuted by idolatry at the time.

These early-christian symbols were usually found in three places: the individual graves of the faithful, the christian sarcophagus – rectangular reliquary for dead people – or most importantly in the well-known catacombs where the richness of their art was displayed.

The agenda of the symbols used are trilateral taken from the Hellenistic and the idololatric world, the Old Testament and the New Testament.

TOPICS FROM THE HELLENISTIC AND THE IDOLOLATRIC WORLD

The myth of love and soul. The soul is depicted as a butterfly and love as a winged child. It symbolizes the passion of the union in the blessedness of Paradise. Many times young people in love are illustrated collecting grapes or flowers. The symbolization is the same.

The four seasons. This is one of the most popular topics. The four seasons are depicted as four women who carry the following on their heads: Spring carries roses, Summer carries ears of corn, Autumn vines and Winter carries olive branches. Their age varies according to the season they represent. They symbolize life that stems from death.

The Dove. This is one of the top-ranking symbols. Sometimes it carries an olive branch or a branch of bay laurel in its beak to symbolize the peace of the soul in Heaven. When it stands on a vessel or flies over a paradise-like place it represents the innocence of the souls of those who died for Christ. Sometimes two or three doves are depicted together to sit on an ancient pot and drink water which symbolizes the water of life. 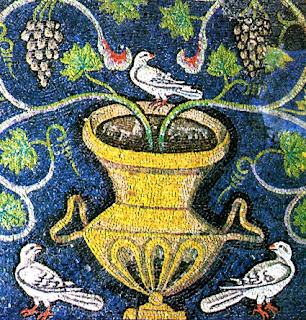 The dove on an ancient pot

The peacock. Another familiar issue. It symbolizes immortality of the soul.

The deer. It symbolizes the soul that desires Lord.

Idyllic places. They are illustrated with plants and flowers and symbolize Paradise.

The phoenix. It symbolizes Paradise. When we have brances of the phoenix, they represent victory of life over death. The phoenix is pre-eminently considered to be the tree of life and many times the Apostles are depicted standing around it in the form of sheep.

The sheep. Sometimes Christ is the captain and some other times the captain is the bishop, and it symbolizes the Church which is guided towards the safe port of faith.

The anchor. A symbol of hope. Upside down it denotes the Lord’s Cross.

Pisces (The fish). Probably the most widely known Christian symbol after the Cross. It symbolizes Christ, and the acronym of the word (Ichtys) in Greek denotes the salvation that Christ offers. (The acronym in Greek means: Jesus Christ The Son of God the Saviour). It also symbolized the divine Service and the sense of Baptism. A lot of fish together symbolize the faithful. 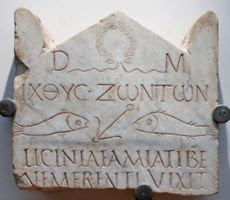 The symbol of Pisces (Icthys)

The Cross. According to Clemes of Alexandria this is the ‘Sunday segment’ and is the most admirable symbol among Christians. It is pre-eminently the symbol that denotes and defines Christianity. With the letter R on its top, it’s the monogram of Christ. Since the 4th century the monogram of Christ has been combined with the revealing letters A-Ω. We also find the cross in the catacombs in a T-form in the middle of names. Eg. AGATPE.

Orpheus. The mythical hero Orpheus who tamed the wild animals when he played his lyre symbolizes Christ who attracts with his teahing, and tames the beasts of our passions.

Apart from the illustrations mentioned above we also find heavenly dinners in the catacombs– in relation to national dinners – in which we can see people eating and drinking. These heavenly dinners should be taken symbolically and not literally because they represent the blessedness of the people who have died who enjoy the bread and the pisces (Christ). Such illustrations we can find in the catacombs of Priscilla, Callistus etc.

TOPICS FROM THE OLD TESTAMENT
A lot of the scenes of the narration of the Old Testament and a lot of the people of it have been used since the first christian Art. But pay attention. These scenes and these historical people should not be taken historically but symbolically.

Adam and Eve’s fall. This is one of the most ancient topics of Christian painting. It symbolizes sin and the departure of man from his relation to God (Paradise).

Noah’s Arc. It has the meaning of the prayed soul.

Abraham’s sacrifice. It symbolizes the soul that has been saved through  sacrifice.

A beardless Moses striking the rock to find water. This is a symbol of the liberating power the water has during Baptism.

The three Young men in the Fiery Furnace and Prophet Daniel among the lions. They are both symbols of the liberation of the soul.

Prophet Jonah. A popular topic. His life is narrated in three or four scenes. He symbolizes the resurrection of the dead. Later on he will denote Christ’s resurrection. 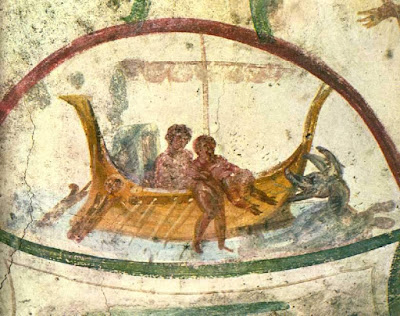 Prophet Jonah thrown into the sea

TOPICS FROM THE NEW TESTAMENT
The good Shepherd. It symbolizes Christ, “I am the good shepherd: the good shepherd giveth his life for the sheep” (John, 10:11), who is looking for the lost (sinful) sheep in order to save it. A favourite topic especially for Christian sculpture in cemeteries. It also inspired the burial service where the chant “I’m the lost sheep” is heard. 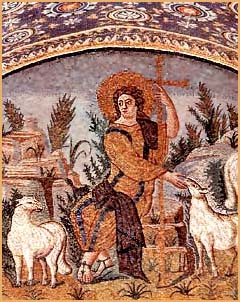 Christ as the “Good Shepherd”

Christ as a lamb. When one lamb is illustrated it symbolizes Christ but when two lambs are illustrated they represent the great Apostles Peter and Paul. A lot of lambs denote the faithful. The 12 sheep around the lamb stand for the 12 Apostles. The Quinisext Ecumenical Synod of 692 forbids the illustration of Christ as a lamb with its 82nd canon. After that, He is represented as human. However, the mosaic of St Vitalius in Ravenna which illustrates Christ as a lamb is marvellous.

The Baptism of Christ. It has the symbolic meaning of the liberating power the water has during baprtism.

Christ healing the blind man. It stands for salvation through Jesus, who opened the eyes of our souls.

Christ healing the paralytic. He is illustrated in two phases. As a sick man and after his healing by Christ while he is getting up from his bed and leaving. The whole scene represents deliverance from sin.

Jesus and the Samaritan woman.  The Samaritan woman is illustrated either while carrying the vessel with water or above the well taking out water. She represents eternal life through Jesus.

Christ and His Apostles. Christ is illustrated on the throne relaying the Gospel either to all the Apostles or to the leading ones Peter and Paul. The scene symbolizes the diffusion of His words through the Apostles.

Bibliography
Kalokiris Constandine: “Introduction to Christian and Byzantine Archaeology (The Art of the East and of the West)