QUESTIONS AND ANSWERS ABOUT HERESIES 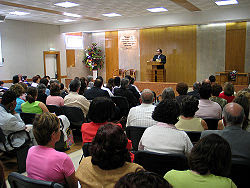 We have been dealing with religious matters for some years now and we have encountered hundreds of questions regarding what heresies are and what they believe in. Due to the fact that these questions are more or less identical and they have been asked over and over again, we thought it would be better to answer them in the form of an article. In order to make this article more conceivable we gave it the following question-answer form...


Question: What is a heresy?
Answer: The word heresy derives from the ancient Greek word αιρέω –ώ (pronounced /haereo/) which in Greek means select or prefer. Therefore, some Christians αίρεσαν (the past tense of the word αιρέω), meaning, they selected to leave the proper teaching of our Church and create their own teaching. They believed that the Church had gone far away from the right teaching of Christ and the Apostles, so they had to say the teaching which according to them was the right one. They were also called heretics because they selected extracts from the Bible – the extracts that were in favor of them of course – to prove that they were the ones who were right and not the Church.
Question: A lot of people claim that heresies are a general phenomenon of our era which shows atheism and unfaithfulness. Is that right?
Answer: Of course not. Heresies are as old as Christianity. In fact, they co-exist with Christianity. Even the books of the New Testament refer to them. For example, the 1st Epistle to Timothy, chapter 1, verses 3-4  “As I besought thee to abide still at Ephesus, when I went into Macedonia, (That is Paul) that thou mightest charge some that they teach no other doctrine, Neither give heed to fables and endless genealogies”, the Epistle to Titus, chapter 1, verse 14 “Wherefore rebuke them sharply (meaning Titus), that they may be sound in the faith; Not giving heed to Jewish fables, and commandments of men, that turn from the truth”, and chapter 3, verse 9 “But avoid foolish questions, and genealogies, and contentions, and strivings about the law; for they are unprofitable and vain” and elsewhere as well. These are the so called Jewish or Gnostic heresies.

Question: Why is the Church against heresies?
Answer: First and foremost the Church is trying to defend itself because heresies attack its foundations. Sometimes this attack becomes cowardly since it uses insults against the Church. For instance Jehovah’s Witnesses and Millenarians call our brothels, and our priests, drunkards, dissolute, whoremongers and so on so forth. Secondly, the Church cannot forget its mission which is the corporal and spiritual salvation of mankind. This salvation is in danger from the well-known “destructive heresies or worships” which drive their members directly into either insanity or suicide. And the seriousness of this issue can also be proven by the fact that it has even bothered the European Union, which condemned the heresies in question through various committees. It even issued the “Recommendation” 1178/1992 in which it is mentioned that these heresies constitute danger against Democracy.
Question: Who resorts to heresies and why?
Answer: Most of the times it is people who have problems that resort to heresies because they hope and believe that they will find a solution to their problems. In other cases it is people with flimsy religious beliefs that resort to heresies because they get furious with some priests who are heard to have caused existent or non-existent problems, which problems in most cases are inflated by the press or the TV. However, by general consent of psychologists who have dealt with ex-heretics, the reason why most of them resort to various heresies is their fear of freedom. The greatest gift given to us by God is the freedom to think of anything we want, the freedom to say anything we want, the freedom to do anything we want; and these people have considered this gift to be a curse because they are afraid of doing one thing or another for fear of remorse; so they’ve found the solution. They have delivered their thoughts, their wishes, and their whole selves to some religious Organisation or to the leader of this Organisation and they think they have sorted everything out once and for all. Now it’s the Organisation or its leader who thinks for them and desires for them. They just perform their duties. And they are overly satisfied with this because they have been convinced that they do all these for some divine purpose.
Question: Is everything in heresies negative?
Answer: No, of course not. Due to the fact that heresies usually consist of very few people, the person who joins them feels the family warmth he might have been deprived of in his/her family or in the society. Moreover, almost without exception all these heresies claim that within their borders one can find moral cleanness and perfection – something hard to find outside them since the world is rife with sin and corruption – therefore the person who enrolls on them feels justified and saved. Apart from that a lot of people who suffer an inferiority complex feel upgraded through heresies because they are given the chance to preach and save the sinful world. 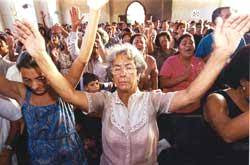 Assembly of Pentecostals who “babble” while “in trance”

Question: Why do we say that the heretics tell lies since they use the Bible which we know it’s true?
Answer: This is a case of HOW you use the Bible and not of using it. Unfortunately the heretics use it erroneously and in the way it suits them.
More specifically: 1. They either add or remove something from it so that its meaning is totally altered. For instance, in the 52nd psalm of David in the book of Psalms we read, “The fool hath said in his heart, There is no God”. If we remove – just as the heretics do – the first part of the sentence “The fool hath said in his heart”, what remains is the second part “There is no God”. In this way we can claim that the Bible teaches that there is no God!!! 2. They combine extracts from the Bible which are not connected to each other. For example they take an extract from the Apocalypse, one from the Epistles to the Jews and a third from Luke’s Gospel, they join the three extracts together and they draw the conclusion that only 144,000 distinguished people will get into Heaven. Let’s do something similar to see where we will be led to. We take the 5th verse of chapter 27 of Matthew’s gospel which says (talking about Judas) “And he cast down the pieces of silver in the temple, and departed, and went and hanged himself” and we connect it to verse 37 of chapter 19 of Luke’s gospel which says, “Go and do the same”, then we can draw the amazing conclusion that the Bible teaches us to hung ourselves! 3. And some other times when they give the meaning of an extract from the Bible they give an allegorical meaning to part of it – in other words what is written is not what is meant exactly – and they take the rest of the extract literally. For instance in the extract from the Apocalypse that refers to the “144,000 sealed of all tribes of the children of ” they take the number 144,000 literally but they take the rest of the sentence allegorically and they save the ones they wish to save!
Question: How come we are the ones who are right? Why is it impossible for the heretics to be right?
Answer: We are right because we have something that the heretics do not have; the so-called Apostolic Teaching and Succession. The Apostles delivered everything they heard from Christ to their pupils, who were ordained Bishops to various Churches (Ignatius the God bringing, Polycarpus of Smyrna, etc.) These Apostles’ pupils delivered what they had heard to their pupils and so on so forth. This way everything believed and taught 2000 ago are believed and taught nowadays as well. And as proof to what we have been saying we give the following information. In every Orthodox Bishopric around the world “Diptychs” are kept, which are lists with all the names of the Bishops from the very first to the very last one. Due to the weakness of the heresies to present anything similar to that – needless to say, the oldest heresy can only span 200 years of existence – they claim that their founder was inspired by the Holy Spirit. However this argument is too feeble to pertain because anyone – deranged or not – can claim for himself that he was inspired by the Holy Spirit and in this case, please tell me…. How can you prove otherwise?