The pre-Christian religion of the Slavs 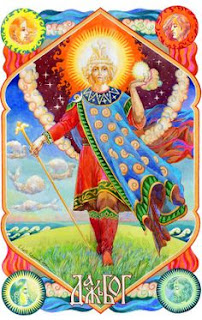 The God Dabog of the Slavs

he beliefs and rituals of Slavic peoples namely of Bulgarians, Serbs, Croats, Czechs, Poles and Russians are difficult to describe, due to the limited number of their sources. However, what is common in these is the word "Bong" which means the God and by linguistic aspect is related to the Indian word “Baghavata” (Lord), quite literally meaning “scrumptious” and was attributed to Vishnu and Krishna, Gods of Hinduism...


Some information about the religion of the Slavs gives us the Byzantine historian Procopius (500-565 AD). Among other things he writes the following: «Because they consider one God, this of lightning as creator and master of all and they sacrifice to him oxen and all sanctuaries ... they respect and the rivers and the nymphs and other such demons, and they sacrifice to all these, and they are making these sacrifices in divination» (Procopii opera, εκδ. J. Haury. Bellum Gothicum, III 14, Lipsiae 1906, p. 357 – 358).
But what really makes an impression in the Slavic Religion is the particular importance given to the world of the dead, from which all came almost the good and evil spirits. The evil spirits came from the dead they had suffered a violent death, as for example those who were murdered, while good spirits came from the dead who had experienced physiological death. Some of them even such as Wasserman (Aquarius), Mar (nightmare) and Srat (ghost of forests) were omitted and incorporated in the paganistic religion of the Germans.
The spirits of the house (Domovói) were protecting the house and the yard, the fairies of birth (Rozanitsi) foretold the future of the baby. However, they have interest mainly the evil spirits and particularly - in these they helped and movies - the Vampires. This demonic creature, called “living corpse”, that initially had the form of a bird, comes at night to search for victims, is killing people and animals to drink their blood from the artery of the neck. According to the Slavic Religion vs. Vampires there was no reliable defensive measure.
The Rousalski (fairies of water), with their laughter, kill their victim and Mitaksfrau (woman of midday) was causing heatstrokes and was stealing little children. The Navi appeared from children who had been killed violently and was attacking in women who were pregnant and like other vampires breastfed the blood of children.
Turning now to the Gods of the Slavic pantheon, things are quite misty, because few of them are known and the most of them in name only. But some testimonials from during the 16th and 17th century were the cause to broaden somewhat the Slavic Pantheon.
There are two Slavic mythical cycles, an eastern () and one west of Mecklenburg - currently located in eastern - and in Eastern Pomerania, a region of .
In both mythical cycles stands out the existence of God Svarogk, probably the highest Slavic deity, who originally was representing the Sun God and later mainly the fire. In there was Perun, a god of the storm, which was merged with the Scandinavian god of thunder, Thor – who he became known and from the latest blockbusters.
The “God the livestock”, Volós, probably was identical with the Veles, a god of domestic cattle and of dead. God of war and at the same time owner of the farmland was Svandevit, whose sanctuary - with oracle of horses in Arkona in Rigken - was destroyed in 1168 AD. In the Polish city of Szczecin - Szczecin Goleniow today - were similar oracles of god Triglav (triceps), who - like his priests were explaining - the three heads were symbolizing the triple domination, in heaven, on earth and in the underworld of the dead.
The Pomeranian god Giarovit, whose name is interpreted as strict mister was a god of war and guarantor of victory. Of  the women goddesses, this who stood out and they were honoring her especially - like the fairies of birth - was the goddess of fertility Mocós, who was the protector of women's work and particularly of weaving.
To the Serbs, at the head of the pagan pantheon was Dajbog or Dabog in the most popular name, which - according to one aspect - was the adoration of the sun. It was something akin to the god of lightning of the Slavs, mentioned by Procopius and was known to the Russians as Perun.
The residence of Dabog was away from the people, in some inaccessible mountain top or wilderness. Since there was appearing to the people through the clouds in the form of lightning. However, particular force and mystery was giving to the Dabog his status, as the god of the dead. Indeed, with this status is displayed - in the old Serbian tradition - in the form of a wolf. Also is known as god of herds, of wealth, of mining, of luck. The anthropomorphic appearance, as a nocturnal rider is postdates and possibly of Asian influence.
But the most important attribute of Dabog, which affected a long run in the general perception of this people about God and influenced decisively the religious psychology, was that of the founder. Dabog, as a national god was considered the natural father of the entire Serbian genus. So, with this capacity, takes some messianic form and cares for his people. In time of war is located always ahead of his warriors and he is who overcomes the enemies or frees his people from them. In peacetime takes care for concord, marriages, births and appears as a great lover.
Another distinctive element in Slavic religion is that the female deities were limited. In several cases the Priesthood presented stronger than the king. The priests were exercising the oracular art and made offerings to the gods with fruits, drinks and animals. They were becoming human sacrifices, but under exceptional cases.
However, although the ancient Slavs were pantheist and animist and they worshiped many deities, thus personifying the elements and the forces of nature, however it seems they had capture the sense of a superior god, who was over all and by all, a sovereign of Earth, terrible god, but it constituted taboo (it was forbidden) to pronounce his name.