CONNECTION OF THE “WATCHTOWER” AND THE “BEAST” OF THE UNITED NATIONS 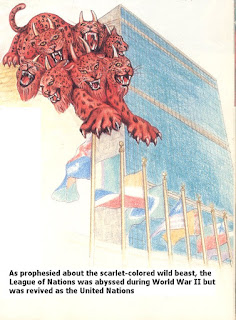 The book of Watchtower "Revelation - Its Grand Climax At Hand!" p. 247: The United Nations is the "beast" of the Apocalypse!!!

When a few months earlier we started our blogspot, “Antiairetikos”, our basic norm and principle was to include only our own articles and not any other publications. Although this is true today as well, we all know that every norm has its exceptions. And we are about to welcome such an exception in our blogspot today. It’s an article written by an invigorated fighter of heresies, Mr. Efthimios Zoulianitis...

Mr Efthimios Zoulianitis is the publisher and editor of the monthly eight – page magazine “The Fighting Orthodoxy”. In the pages of this magazine readers can find epistles to heretics and especially to “Jehovah’s Witnesses”.

In the letter he wrote to us together with his article he points out that he sends the “Fighting Orthodoxy” to 120 heretics per month but, to the headquarters in Athens and in Brooklyn, but also to other Greek cities like Trikala or Karditsa and anywhere Jehovah’s Witnesses have local ‘churches’. According to his statement, none Jehovah’s Witness has ever answered his epistles.

So, in order to honor this man, we publish one of his epistles addressed to “Jehovah’s Witnesses” and deals with the connection of the Watchtower with the Organization of the United Nations, which the Watchtower itself describes as the “beast” of the Apocalypse.

8th Open Letter
To
the “Jehovah’s witnesses”, Kifisias 77,
15124 MAROYSI.
Cc: Watchtower 25 Columbia Heights,
.
Subject: The “Watchtower” and the “beast”.
Dear Sirs,
The organization of “Jehovah’s witnesses” that exists and operates since 1931, calls Jehovah, Darius and Jesus Christ, Kyros. Those are two names that historically lead us to the Medes and the Persians of the pre-christian era (Darius 521 – 484 B.C. and Kyros 538 – 529 B.C.). And those who side with the “Watchtower” shall feast on the earth’s material possessions.
They say: “…those who now side with Darius the great, the Jehovah God, and Kyros the great, our Jesus Christ, shall enter into a wonderful prosperity. Are you one of them?” (“Thy kingdom come” page 165, published by the Jehovah’s witnesses 1982).
If you are not … fortunate enough to belong to the above category of Darius Jehovah and Kyros Christ, and happen to belong to the Christian Church, then, according to the “Watchtower” you do not belong to Jehovah but to the:
“Beast with horns”
This beast has “seven heads and ten horns” (Revelation 17:2). Which is that beast? The answer shall be given from the Organization of “witnesses” from their above mentioned book that quotes:
“To an international meeting of Jehovah’s witnesses in 1942… the speaker, the president of the Watchtower N.H. Norr proved that “the beast which…was”. It was the Society of Nations”!...
President Norr proceeded and demonstrated that…”that beast was revived in 1945 as the United Nations” in other words the UN. And he continues: “This international “beast”… is in reality “covered with blasphemous names” (See the above mentioned book page 166).
Note
Our beloved “witnesses”, for the above mentioned humorous and childish things you write in your books and in your “Watchtower”, you will not be blamed. You may also write other more… colorful and more tragicomic things, since one way or another you manage to persuade the unfortunate followers of the “Watchtower” and you make them believe that they allegedly come from Darius Jehovah as “digestible food”.
That for which the followers of the “Watchtower may blame you is that, without them knowing, and behind their backs you played once a dishonest game in their expense by underestimating their intelligence and considering them to be awkward. The fact is, you insistently requested to be part of the “beast” in other words of a beast “covered with blasphemous names”, the: UN. You succeeded the task you requested. The relevant abstract from your connection with the “beast” is the following: 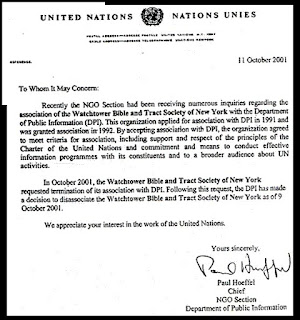 Why do you lie????
Our beloved “witnesses” we ask you, and if you wish, give us your reply:
First. Is the Athens Bethel aware that at one point (1992) the Watchtower was linked to the beast “covered with blasphemous names”? If it did know, then for what reason, did you accept this dishonesty? And if you covered up this sneaky action by the Governing Party of the “Watchtower”, then why did you consent to teaching the unlucky followers that the Christian and other nations will be destroyed by Darius Jehovah in the battle of Armageddon?  Do you fear they might leave from the “Watchtower”?
Second. When knowingly you teach lies that you are under the impression of being part of the True God’s love or just trade with the hopes of the naive and unfortunate people with your lies!...
By love of Christ
Efthimios Zoulianitis
Kanari 15
Trikala 42100