THE WATCHTOWER – ERRORS, LIES AND CONTRADICTIONS 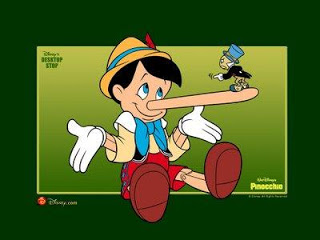 The Watchtower - A Pinocchio with a very very long nose!

The truth is that a whole volume wouldn’t be enough to include all the lies, the errors and the contradictions of the Society of Jehovah’s Witnesses “The Watchtower”! That’s why we are going to present only a few of these in the current article and we may recur with more in the near future...

In the Society’s magazine “The Watchtower” of August 1st, 2003, p 14 we nicely read that the truth IS NOT A MATTER OF PERSONAL OPINION. And that for everything there is always ONE CORRECT ANSWER. It is impossible for both a thing and its opposite to be valid at the same time:

Truth is not a matter of personal opinion. For example, either the human soul is immortal or it is not. Either Satan exists or he does not. Either there is a purpose to life or there is not. In each case, there can be only one correct answer. One is true, and the other is false; both cannot be true.

And as the article goes on, on page 16 we read that IF WE ARE CAUGHT TELLING A LIE no one will believe us again in the future.

When we are known to be truthful, others believe what we say; they trust us. However, if we are caught telling even a single lie, others may doubt the truthfulness of anything we say in the future. An African proverb states: “One falsehood spoils a thousand truths.” Another proverb says: “A liar will not be believed, even when he speaks the truth.”

“The watchtower” of August 1st, 2003, p 14: If we are caught telling even a single lie no one will believe us again in the future

Adopting now and following the reasoning of “The Watchtower”, let’s see if the Society of Jehovah’s Witnesses has ever lied. In order to do this we’ll keep our favourite method, the one we have followed in our previous articles referring to Jehovah’s Witnesses, too, that is, we’ll let the publications of the Society speak on their own.

THE TRUE GOD
In “The Watchtower” of September 1st, 1975, p 539, there is an article entitled “Is Mary Truly the Mother of God?” As we can all understand the article deals with Virgin Mary, because as we know, Jehovah’s Witnesses not only reject her holiness, but they also reject the fact that the Christ she gave birth to was actually God. They say that he became something like God, a sort of God, afterwards during his baptism. So, the magazine “The Watchtower” writes among other things:

“The watchtower” of August 1st, 1975, p 539: Nowhere in the Bible is the expression “true God” used to refer to Jesus Christ

Let’s see now whether the Bible refers to Jesus Christ as the ‘true God’ or not. In the New Testament and more specifically in the first epistle of John the Evangelist, chapter 5, verse 20 we read, “And we know that the Son of God is come: and he hath given us understanding that we may know the true God, and may be IN HIS TRUE SON. THIS IS THE TRUE GOD and life eternal.”
No need to comment on this, we think.

THE CROSS
It’s also known that Jehovah’s Witnesses have hatred for our most sacred symbol, the Cross. “The Watchtower” of February 1st, 1968, pp 93-94 stresses out this enmity, which sometimes goes to the length of abhorrence against the Cross, by stating, “True Christians – that is, Jehovah’s Witnesses – NEVER revered the cross…” And it goes on claiming that the Cross is a pagan symbol and that Christ died on a stake and not on a two-beamed cross.

Your victorious trophies not only imitate the appearance of a simple cross, but also that of a man affixed to it.” (The Ante-Nicene Fathers, Vol. 4, p. 191)
True Christians never revered the cross or regarded it as a symbol of true Christianity.

Well, is “The Watchtower” right? Is it true that Jehovah’s Witnesses never rendered the Cross? Unfortunately this is another ‘truth’ – meaning a lie – of the ones that the Watchtower has been used to. Although we’re willing to believe in what they say, their own publications don’t really let us do so. For instance, in the book of “The Watchtower” entitled “The Proclaimers of God’s Kingdom”, on page 200 we read that the Bible Students (this was the older name used for Jehovah’s Witnesses) used to wear a badge illustrating the Cross, and in addition, the Cross APPEARED on the front cover of their main publication, “The Watchtower”.

For years, Bible Students wore a cross and crown as a badge of identification, and this symbol was on the front cover of the “Watch Tower” from 1891 to 1931. But in 1928 it was emphasized that not a decorative symbol but one’s activity as a witness showed he was a Christian. In 1936 it was pointed out that the evidence indicates that Christ died on a stake, not a two-beamed cross

EVE
In the 60s the Society of Jehovah’s Witnesses “Watchtower” which as we all know is a publishing company under a religious veil, puts into practice one of the greatest frauds of all eras; the act of defining the Day of Judgement which is to come in the autumn of 1975.

And hordes of Jehovah’s Witnesses surged the streets all over the world to sell as many publications of the Society as they could, because they thought that this was the right way to be favoured by their Jehovah. The result of all this was huge incomes and profits amassed by the Society in Brooklyn.

A number of articles appeared in their publications during that period, to offer assistance towards that goal. One of those articles dealt with Eve and with the time when she was created. Because “The Watchtower” claimed that if we find out when Eve was created then we’ll be able to find out WHEN EXACTLY CHRIST WILL COME. But let us explain a few things so that it is easier for you to understand.

“The Watchtower” claimed in its publications that every day of God’s creation lasted 7000 years. So, the seventh day during which God rested must have lasted 7000 years as well. But, pay attention, within this day of God’s rest what is also included is the millennium of Christ’s reign (That’s why Jehovah’s Witnesses are also called Millenarians), which starts on the Day of Judgement. So if we find out when Eve was created we will be able to calculate when Christ will come back, according to “The Watchtower”.

So, in “The Watchtower” of May 1st, 1968, p 271, there is an article entitled “The Seventh Day”. There, among other things, it is stated that Eve was created a few days or a few months after Adam’s creation in 4026 B.C. And it leaves no doubt about that as the year is repeated once again, the year of Adam and Eve’s creation is 4026 B.C.

Therefore, God’s seventh day and the time man has been on earth apparently run parallel. To calculate where man is in the stream of time relative to God’s seventh day of 7,000 years, we need to determine how long a time has elapsed from the year of Adam and Eve’s creation in 4026 B.C.E.

And the article is completed by saying that in eight years’ time after the autumn of 1967 the 6000 years of God’s rest elapse and in 1975 the millennium of Christ’s reign begins. However, the year 1975 went by and nothing happened, leaving thousands of followers of the Watchtower disappointed and dejected, who – thinking wisely – abandoned the Society.

But instead of apologising as it ought to do about that outrageous mistake, the Society tried to get away with it. WE DON’T KNOW WHEN EVE WAS CREATED it declares in “The Watchtower” of October 1st, 1975, p 579, because we don’t know how much time elapsed between Adam’s creation and that of Eve’s!!! Enjoy the following document from “The Watchtower”, THE GREATEST LIAR OF ALL ERAS.

No, it does not mean that. Why not? Well, the Bible record shows that God’s creations on the “day” just preceding that 7,000-year “rest day” did not end with Adam’s creation. It shows a time lapse between the creation of Adam and that of his wife, Eve. During that time, God had Adam name the animals. Whether that period amounted to weeks or months or years, we do not know. So we do not know exactly when Jehovah’s great “rest day” began, nor do we know exactly when it will end.

“The watchtower” of October 1st, 1975, p 579: We don’t know when Eve was created!
‘No comment’.
PROPHET
The following episode in the series of ‘truths’, meaning lies, of “The Watchtower”, comes from the same period of time.
Due to the fact that the Society has noticed a light slackness in the circulation of its publications and for fear of losing profits, resorts to indirect threats against its followers. In “The Watchtower” of March 1st, 1973, p 150, the Society warns them not to believe the people who call the Society a ‘fake prophet’ – how did that get into their mind??? – and it also intimidates them by saying that everything it has said will come true since “The Watchtower” is really A PROPHET.
None of us should want to be like these indecisive, unresponsive ι ones. Better it is to know now, rather than too late, that there is an authentic prophetic class of Christians among us, and to accept and act upon the Bible message, “not as the word of men, but, just as it truthfully is, as the word of God.” (1 Thess. 2:13) Those who wait undecided until what Jehovah’s Christian witnesses have been proclaiming ‘comes true’ “will also have to know that a prophet himself had proved to be in the midst of them.” (Ezek. 33:33)

And it was proclaimed prophet not just by anyone, but by Jehovah Himself!
We would need numerous pages to refer to the… ‘Prophecies’ of “The Watchtower”, to make everyone laugh to their hearts, something we might do in the future.
And now we’ll go to another publication of the Society, entitled “Reasoning From the Scriptures”. On pages 132-137 of this book “The Watchtower” deals with the ‘fake prophets’. No, no! You misunderstood. It doesn’t deal with itself but with the others!! You wonder why! Because as if it had been misguided, “The Watchtower” full of modesty and humbleness, claims that it never declared itself as a prophet, because – listen to that – it has made mistakes, too:
Have not Jehovah’s Witnesses made errors in their teachings?
Jehovah’s Witnesses do not claim to be inspired prophets. They have made mistakes. Like the apostles of Jesus Christ, they have at times had some wrong expectations.—Luke 19:11; Acts 1:6.

Book "Reasoning From the Scriptures" pp 132-137: The Watchtower is not a prophet!

Apparently, as years have gone by, “The Watchtower” has become elder, and as it is natural for old people, its memory fails to remember what it had been saying back in 1973. As far as what is stated about the apostles, about the fact that they made mistakes too, this is an outright lie. After the Day of Pentecost, the apostles neither made mistakes nor said anything that took back afterwards, as Jehovah’s Witnesses do all the time, who dare to claim additionally that a second pouring of the Holy Spirit was made upon them.

If any of you wonder whether there are people who actually believe these things, we’ll answer with Einstein’s quote below: “There are two things which have no limits; the universe and HUMAN STUPIDITY. I’m not sure about the first.”