DIVERSIONS OF THE CHRISTIAN MONASTICISM 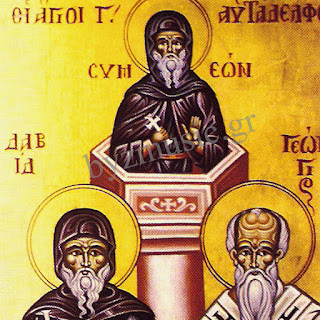 he monachism was born from the need of some Christians to leave the social - cosmic life, to dedicate themselves completely to God. Especially this need became more intense when he began to experience and within the Christian communities the hypocrisy of the world. In the 4th century AD in major cities of the empire there was a discount of spirituality because many they accepted Christianity without knowing well his teaching...


From the other side, many Christians allied with state power and were removed from the Christian spirit of selflessness and offering to their fellow man. So many Christians began to leave the cities and villages to live in deserted places and later in monasteries, where they also were engaged in exercise, repentance and prayer.
Unfortunately, as always happens in life, the proper attitude toward the monastic life was not respected by all monastic “currents” and especially those, that dominated by the enthusiastic element, with the result to observe deflections from the genuine monastic life.
1. As the first diversion from the genuine monastic class we can consider this that occurred by the monks, who were “around the presbyter Eustace”. This monastic diversion is so named from the session of Gangra of Paphlagonia (343 AD), which excommunicated him and anathematized, but which does not mention the presbyter Eustace personally, because of the prestige that this man were enjoyed. However, whenever referred to them, always makes mention for “around the Eustace”. Efstathios the presbyter and later bishop of Sebastia, was the first who had transposed the monastic life from to , as Sozomen our rescues, in his Ecclesiastical History 6, 34.
He believed that monasticism had to generalized to all Christians without exception and to all the clergy, thus rejecting the teaching of the apostle Paul for the freedom of each believer. His followers were circulating in small groups, they believed that the marriage and meat eating is an obstacle in the redemption of man, and so, they urged to the celibacy and they expanded the fasting during the day Sunday. Applying program equalizing men and women had the same lonely garment for both sexes to not be distinguished, and that's why women were cutting their hair. Were rejecting the sacraments of the Church, although some extreme of them were despised her wholly. Indeed, they had been reached such a degree of excessive egoism and arrogance, proclaiming that these are the real "who martyred in consciousness" and not the witnesses, which suffered martyrdom for a few minutes. Result of all this was their desire for ownership of ecclesiastical things, of tenders etc. because rightfully belong to them.
From the session of Gangra, let's see now some rules which condemn these particular diversions of “around Eustace”:
“If someone accuses the marriage and the woman who is sleeping with her ​​husband, although she is faithful and devout he abhor her or he accuses her, that can not enter to the kingdom (i.e. of heaven) anathematized” Rule I’.
“If someone criticizes him who eats meat (without blood, idol-sacrifice and smothered), with reverence and faith, that has no hope when it receive communion, anathematized” Rule II’.
“If someone refuses to receive the holy communion by a married presbyter because (i.e. thinks that he) should not be working, anathematized” Rule IV’.
“If someone teaches that the house of God (i.e. the ) is despised and the congregations, that made in him are despised, anathematized” Rule V’.
“If someone wants to take or give the ecclesiastical offerings, outside the Church without the bishop's opinion or someone appointed for these, anathematized” Rule VII’.
“If someone - for an alleged exercise – modifies the apparel and instead of the usual female clothes wearing men's clothes, anathematized” Rule XIII’.
“If someone leaves his children and does not bringing up with the due reverence for God, but he neglects them on the pretext of exercising, anathematized” Rule XV’.
“If someone for alleged exercise fasts on Sunday, anathematized” Rule XVIII’.

2. The Messaliani or Massaliani as Epiphanius calls them in his work “Against Heresies” 80.1. Those were characterized for the unbridled and excessive asceticism. They lived together men and women for moral exercise, similarly to the monks “around Efstathio”, but differed from those because the men like the women had long hair, as opposed to others, where women were cutting their hair. The landlessness namely the lack of any individual asset, celibacy, prayer and fasting strictly were adhered by them, to the point that to have sustained prayers putting into practice the words of the Apostle Paul "Pray without ceasing" 1 Thessalonians 5:17. Because of enthusiast trends that prevailed to them, indulged in dances, believing that through these were achieved the exemption from the demonic energy, which as the root of sin remained and after the baptism. Like the “around Efstathio” they denied the ecclesiastical rituals and they had humble opinion about the Church. Basing their views in biblical passages such as “Don't you work for the perishable food, but for the food that stays to eternal life” Gospel of John 6:27 and “Mary chose the good portion” Gospel of Luke 10: 42, were not working, but were living by begging.
Because the Messaliani pursued with materials or extortionate means, such as with continuous prayers from which they took their name, with dancing etc. the view of divine light, for that from opponents of hesychasts was considered that affected the subsequent movement of Hesychasm, which of course is not true.
3. Remains of the Messalianι are the Bogomils “Theofilo”, which were derived from the Paulicians in . The Bogomils were distinguished for the asceticism and the strict fasts. Their name came from the Slavonic “Bog”, i.e. “God” and “miloui” meaning “have mercy”, probably from the usual expression “God have mercy”. There is also the version that can be called so and from their leader Bogomils, but this person deemed fantastic, which was created by the Slavs to support the idea that the Emperor Justinian descended from Slavs. The Bogomils came from the sect of the Paulicians of Asia Minor, many of whom the Byzantine Empire in the 6th and 8th centuries AD - and in particular Constantine V – were relocated in Thrace and Moesia, who had been ravaged. Even, in these areas there was also a relative sect of Efchiton (from the Greek word EYXH = wish). The basis of the teaching of the Bogomils was based on the duality, i.e. in the existence of a good and a bad God. According to these, Sataniil, the eldest son of God is the creator of the world and of the sly matter and Christ, the youngest is the savior of the world that was surrounded the form of an angel. The Bogomils are followers of Christ, while the other Christians are of Sataniil, centered Hagia Sophia in .
They avoided the marriage, the meat and from the ecclesiastical adoration were applying only the “Lord's Prayer”, i.e. our well known “Our Father”, which recited seven times a day and five times a night. Accepted only the so-called spiritual baptism, which was made by placing their hands and reciting the “Lord's Prayer”. In the Divine Eucharist they attributed symbolism, which were expressing with the recitation of the fourth request of Sunday prayer “our bread, the daily bread”.
Although the leader of this monastic diversion, the physician Basil sentenced to death by fire and despite the coordinating imperial agents against these, this move was maintained until the 13th century AD in the East. In fact, popularized by and in the West, whose successors were the “Pure” (from the Greek word καθαροί, katharoi = pure) and the “Valdensioi”. Presbyter Cosmas fought against with fiery speeches the erroneous theories of Bogomils.
With the monastic diversion of Messaliani had dealt many local sessions, but par excellence the third Ecumenical (431 AD), which excommunicated and anathematized them.

4. Because in the tours of the early Christians to disseminate the Gospel, there were men and women who they were renowned for their continence and virginity. People attributed to them honor and respect, leading some of them to be presented seemingly lecherous and unhinged, because they thought that the excessive respect and honor distorted the purity of holiness of them. These were called “the Fool for Christ”.
In the "Fool for Christ" someone can to include and the “Exhibitionists”, i.e. those whom showing their genitals and the “Beggars”, i.e. those who believed that into begging there is the virtue of humility. Renowned and very famous were the so-called “Stylites”, who lived onto pillars of 7 and , wishing thereby to show their perfect elimination from the world and interns in patience and endurance.
But it must be said and this paradox: While the Church “was condemning” the life of “fools for Christ” and “Stylites” does not ceased to "admires them" for this way of life, that is why and some of them ranked in the chorus of saints, like Simeon from Emessis (between 527 and 567 AD), Andrew from Constantinople (880-946 AD), Luke from Ephesus (11th century AD) etc., Simeon (5th century AD) and Daniel (5th century AD) the "Stylites" etc.
In the "Fool for Christ" the Church sees the deeper content of them. The denunciation of the pseudo-morality of “Christian” society and the reality and truth that hides behind the pretenses of this world. The "Fools for Christ" come in the period of “secularism” of Christians to remind the character of “moronism” of the Gospel and the incompatibility of salvation and holiness, with satisfaction, that gives the social reputation and objective recognition. They denounce the atomic virtue that divides the man from God, because it creates self-gratification and separates him from the people, who do not dare to expose their need and weakness.
Of course as we know, the genuine ascetic life is full of deprivations and bad living conditions, some monks in the early Christian period submitted to themselves excessively torture, like for example the “sideroforountes” (those who were wearing curlers) and others. But in the Christian monasticism and asceticism we never see the distortions and the horrible torture that exist in the asceticism of other religions such as to the Indians ascetics. Such warped perception never prevailed in Christian monasticism, in which as the price due and the respect to the militant and to her hierarchy are very deep.
Besides, the main founders of monasticism, the Great Anthony who is considered the father of anachoreticism and Saint Pachomius, who founded the first monasteries and the coenobitic way of life of the monks, was feeling deeply their status as members of the Church of Christ and they was very closely linked with that, through the frequent participation in her sacramental life and worship.
Like Palladius writes to the "Lafsaiki History," in which recounted the struggles and the maxims of the ascetics: “If it is possible, the monks must to receive communion of the mysteries every day. Because he, who removed of them, removed from God. He who receives communion constantly the Savior, continuity welcomes him”.