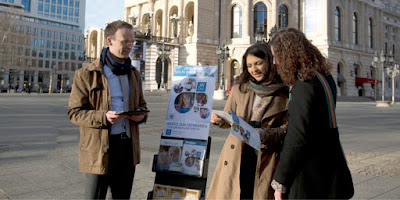 THE PREACHING IS FOR THE OTHER PEOPLE –  NOT FOR US!
Once, in a village somewhere in , during the Church Service the priest came to analyze the extract from the Gospel which referred to the importance of charity. After he had said everything he had to say he reached the point where the gospel says: “Anyone who has two cloaks, he should give the one to that person who has none”. “Well”, said the priest, “since we don’t wear cloaks today but coats, if we have two coats and we know that a poor person does not have any, we should give him one of our coats.”...


His wife happened to be among the people who had gathered to hear his preaching. When she went back home while she was doing the housework, she heard a knock at the door. When she opened the door she came face to face with a miserable, poor old man, almost naked, shaking from the chilly weather, since it was winter, who was asking for any kind of help. The priest’s wife having her husband’s words still echoing in her mind, decided to suit her action to his word, so he dashed to their bedroom and brought one of the priest’s coat – the warmest and the most expensive – to the surprised beggar. A few days later when the priest looked for his coat and couldn’t find it asked his wife where it was. Then the priest’s wife, who had proudly kept her action for a surprise, filled with happiness narrated the incident with the beggar. Amazed as the priest was, he answered, “The preaching is for the other people, my wife, not for us!”

WHAT LAURA WAS IMPRESSED WITH
This cute little story, which except for the other messages it carries, it overtly denotes the difference between words and actions, especially for people who belong to the clergy, came to our mind when we saw the cover page of the ‘Watchtower’ of 15th November, 1999.
Every cover page of the issue ‘Watchtower’ tries to build bridges for entrapping new victims in the nets of the Society. Whatever is mentioned on these cover pages always aims at pinpointing the difference of the Society and the perfection of the Society in relation to the other sinner world. And this is achieved, for example, with the publication of an incident about a Jehovah’s Witness who took a wallet back to its owner. But unfortunately, the Watchtower is not limited only in this, but using its typical attitude of slandering all the others, also includes the statement of the person who had lost the wallet, which states that in his own church nobody would have given it back, as once, during a visit to the church he had his hat stolen!
On other occasions, when the Society want to extol the congregations of the JWs, the cover page refers to a specific congregation which has impressed the rest of the world due to the fact that the participants collected all the garbage from the stadium in which the congregation was held, and everybody commented on the nice and clean attitude of the JWs; and these hilarious incidents do not seem to have an end.
And towards the end of every cover page, the readers are invited to visit any JWs’ church to see with his/her own eyes the perfection and the divinity prevailing in it.
So, the cover page of the “Watchtower” of November 15th, 1999, refers to a university student named Laura, whose assignment was to attend and observe a religious service and record her impressions from it. Laura selected Jehovah’s Witnesses to observe and, as expected, she found everything was perfect in contrast to the other churches. But above all, what really impressed her and left a profound print on her mind, was the fact that there were no contributions in the ’s Witnesses. On the contrary, in all the other churches she had been to, not only the participants were obliged to make financial offerings, but also the other churches were not ashamed to take money even from young children. And to prove what they say and to create the correct impressions to the reader in favor of the “Watchtower”, they publish a photo with a contributions box showing a hand putting a dollar-note in it. 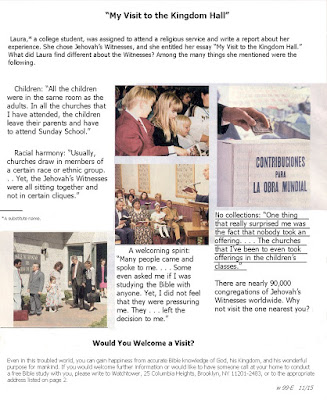 Back page of the “Watchtower” of November 15th,  1999. Laura finds everything is perfect in the JWs and she realizes there are no contributions

THE CONTRIBUTIONS BOX
Up to now there’s no fault on the part of the Society and we have no reason to doubt its honesty. Meanwhile, the Watchtower is ‘the unique conductor of Jehovah’, isn’t it? Is it possible for Jehovah-God to lie?
Yet, while we were going through all the publications of the Society, and specifically in the “Watchtower” of January 15th, 2000, p.25, we saw the same contributions box and a joyful gentleman putting a note in it. At first we thought it was the contributions box that all the other bad churches use. However, to our surprise we realized that this box was.... actually Jehovah’s box!!! It was clarified in the passage accompanying the photo which also said that if we wanted to honor him we would have to do the same as the joyful man of the photo who turned out to be a Jehovah’s Witness!!! 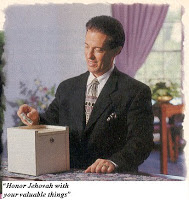 After the first surprise was over, we said, anyway, nobody is perfect, “let it go”. Then Laura came to our mind who spoke about the other bad churches, which are not ashamed to take money even from young children, and when we put everything into contrast we found out how right she was, and we agreed with her on her statement that the Society of Jehovah is perfect and holy.

OFFERINGS FROM YOUNG CHILDREN
Because to take money from adults is not so bad, but to do the same with young children is shameful and disgraceful.
Despite all these though, we couldn’t feel at ease. And we went on browsing the publications of the society until we reached the cover page of the “Watchtower” of April 15th, 2000. What is illustrated in that issue is a young child from holding a rooster. After reading the text following the photo, we realized that the young boy had raised a chick and when it became a rooster he sold it and sent the money to the “Watchtower”. Recalling Laura’s words and since the “Watchtower” does not want to look like the other bad churches that take money from young children, we thought that the “Watchtower” would thank the little boy for that great deed and after that they would certainly send the money back.
But the text totally disappointed us. The Watchtower didn’t give the money back to the little boy. And as if that was not enough they stressed the importance of the boy’s action which, according to them, had set an example for all Jehovah’s Witnesses who were invited to do the same. 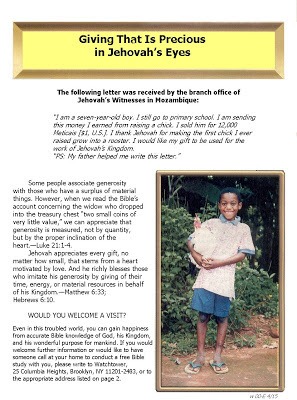 Back page of the “Watchtower” of April 15th 2000. The young African boy sold the rooster and sent the money to the Watchtower!

Well, to be honest, this didn’t seem right, but we said, ‘who knows, maybe Jehovah had had some extra needs lately and he decided to urge the Watchtower to collect even meager amounts of money’. In addition, as people say one equals nothing. In other words, the fact that the “Watchtower” took money from a little boy doesn’t mean that they will take money from all children. So we looked through all the publications of the Society to dissolve all doubts on the issue and to avoid charging the ‘miserable’ Watchtower with something they don’t do.
And guess what we found out. The good Society “Watchtower” that never lies (Tell me another one!) did it once again. In the “Watchtower” of August 1st, 1968, page 471, the Society is found to praise once again some other kids for their contributions to the Watchtower with money they had set aside from their pocket money. And they also give their address in so that nothing is lost in the way and for fear that Jehovah doesn’t take it!

"In fact, we know of some very young children who,
out of their own small allowance, insist on making
their own personal contributions for advancement
of the Kingdom work. We can be sure that such
manifestations of sincere thanksgiving do not go
unnoticed by the loving God who is the giver
of every good gift and perfect present.—Jas. 1:17."

The “Watchtower” of August 1st 1968, page 471. Young children send their ‘pocket money’ to the Watchtower!

THE FEMALE PIGMY
But what really infuriated us is a photograph with which the Organization of Jehovah’s Witnesses really exceeds itself in lies and in inconsistency, and proves once again how persistent they are not only on telling lies but on slandering others as well. This photo was published in the Watchtower of November 1st, 2005, page 26, but before we describe what it depicts, it’s worth remembering once again what Laura had said when she first visited the congregation of Jehovah’s Witnesses.
She didn’t see a contributions box, and she didn’t see anyone offering money , and moreover she didn’t see any young child making a contribution.
Bearing all these in mind when one sees the photo in the Watchtower of November 1st, 2005, wouldn’t believe his/her eyes. Because this photograph shows a very young girl dropping money in a contributions box – the ones that Laura didn’t see! – and there is also a caption above the photo which applauds the action by saying,
“Contributions that warm God’s heart!!” 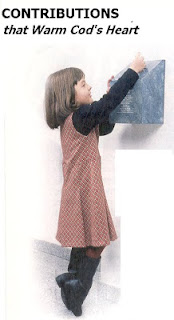 Of course our dearest Jehovah’s Witnesses may as well claim that our eyesight has failed us because the person we see in the photo is not a young girl but a female pigmy!

We’ll certainly agree with them. It’s a female pigmy indeed!

CONTRIBUTIONS TO THE WATCHTOWER FROM JEHOVAH’S WITNESSES
Finally, we get the sense that this Jehovah of the “Watchtower” is insatiable and expensive. Because he not only takes young children’s pocket money, but he also takes anything valuable. From money that is collected from the contributions boxes in the Kingdom Halls (how come...Laura didn’t see them! Was she blind?) to life insurances, individual retirement accounts, stocks and bonds, jewelry, estates (The Watchtower is good enough to let the doner/owner live in the house until he dies or to take the rent if that exists from the house that he donated!) wills and trusts. And last but not least that Jehovah of the Watchtower is so benevolent that accepts special contributions, which if the donor finds himself/herself in need, may be returned to him in... February 30th!
Don’t call us malicious because The “Watchtower” of November 1st, 2002, pp 28-29. proves we are right. 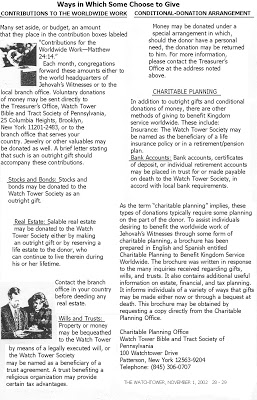 The “Watchtower” of November 1st 2002, pages 28-29. Donations of stocks and bonds, estates etc. from JWs to the Watchtower!

Of course it’s widely known that the huge amounts of money that the Watchtower collects every year are not invested in the building of a charitable institution (hospital, old people’s house, foster home, etc.) THE WATCHTOWER DOES NOT OWN ANY CHARITABLE INSTITUTION WORLDWIDE!!!
Most of this money goes to buying the state-of-the-art printing machines, the erection of buildings which will house the biggest possible printing activity of the Watchtower, to the salary the special soldiers will get, that is people of the Society who try to “entrap” new “victims” for the Organization, people who will work without being paid for the rest of their life in order to launch the products of the Watchtower. Some of this money goes to the erection of Kingdom Halls, that is the congregation rooms of Jehovah’s Witnesses, especially in the poorer countries
So, the preaching is for the other people, my wife, not for us.