ECOLOGY AND THE ORTHODOX DOCTRINE 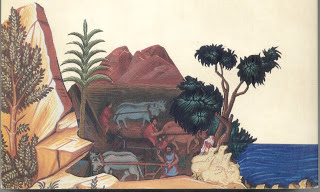 The wildfires that broke out last August in and the wildfires that had occurred in August 2007 not only caused great suffering and damage to my country, but they also proved once again how mankind degrades the environment.

So, we have decided to see whether the thought and the teachings of the Great Ecclesiastical Fathers of Eastern Christianity, especially of Basil the Great (known as Basil of Caesarea), of Gregory the Theologian (known as Gregory of Nazianzus) and of John Chrysostom, could be of any help in approaching the environment in a totally different way, so that we would be able – in the long run – to solve the huge Environmental Problems we’re facing today...

HOW HAVE WE COME TO SUCH AN IMPASSE AS FAR AS THE ENVIRONMENT IS CONCERNED
It would be helpful for the reader to look into the reasons first why we have reached such a crisis today and why the environment is in danger. And certainly, Christianity has played its role to that crisis. Even in the first years of its existence there were philosophical movements and heresies, which under the influence of Plato and his student Plotinus degrade matter in contrast to the spirit. Especially the heresy of Gnosticism, regards nature and the world as the creation of a degrading evil God. A branch of Gnosticism, Manichaeism, influences the thought of the Greatest Father of the West, of Holy St. Augustine. And due to this influence the whole theology and philosophy to be formed in the West has been affected, making it easy thus for all those thoughts and practices which degraded the material creation and allowed for the ravaging and the depredation of it to develop.

So the theologian, philosopher and mathematician Descartes, who is considered to be the precursor of orthology, accepts the material world as a perfect machine in the service of man. After Newton’s  discoveries the Western man is exhilarated by the technological achievements and starts to realize the surrounding environment as ‘res’, meaning as a ‘thing’, which is to become a ‘guinea pig’ in his needs for consumerism and bliss!

The relationship between God and humans is stopped. Due to the Cartesian theory of Dualism, God is ousted from human life and is now considered to be a supreme perfect being, a great mechanic who created the world and after that he left the world working on its own, just like a clockmaker who after he has made a clock he lives it ticking on its own.

At the same time in the advanced countries of West Europe and of the U.S.A. people induced by Calvin’s protestantic ethics will set up one of the most hideous economic systems of exploiting man and the world, Capitalism. It may sound absurd, but the foundations of the capitalistic system were actually religious. It is based on Augustine’s doctrine of predestination, of which Luther and Calvin became fans. The doctrine of Predestination refers to aristocratic elite of faithful who have been selected by God in advance and will be saved. The visible sign they have in order to be selected for salvation by God is their wealth. Wealth and Profit never again reached such divine dimensions in the History of Mankind – although it is still worshipped in our Capitalistic system, regardless of the means used to achieve it, slavery, rape of nature, or inhuman working conditions, in the so-called .

THE THREE HIERARCHS’ PREACHING ABOUT THE RELATIONSHIP OF MAN WITH NATURE
Contrary to what is happening in the West, in the East, when the three Hierarchs were called to comment on the book of the Holy Writ, Genesis, they made a distinction between Man and Nature, which is in fact the solution to the big ecological problem. They accept the creation of both the world and the man as a result of the free loving power of The Trinity God. Therefore when man looks around him, he should actually see the loving power of God everywhere, even in the tiniest things even if they are inanimate. So he can’t abuse nature because then he refuses God’s love. In order to make this explicit let us quote a letter that Elder Joseph the Hesychast sent to one of his spiritual children: “Listen to the wild rocks, the secret theologians, to deliver profound meanings and spirit to Lord. The voiceless theologians speak theology, the beautiful rocks and everything in nature. Everything speaks with its voice or with its non-voice. If you touch a tiny grass with your hand, it speaks out right away with its natural odor. Hey! You don’t see me, but you have hurt me! And everything has a voice, when moving with the wind they become a harmonic musical prayer to God. And, what is to say about reptiles and birds? When the Saint sent his disciple to tell the frogs to hush, they answered: “Be patient, until we finish the matins.”

The harmonious relationship between man and the environment is also apparent in the instance when God assigns Adam the job of worker and protector of . And the culmination of this relationship is delivered to us when all living creatures, from birds to reptiles and beasts, are led before him to give them a name.

The verb ‘know’, which has caused so many sufferings to nature since the western spirituality interpreted it as possession and depredation of the object under investigation until it yields its secrets to us, in the Pateric Orthodox thought it is interpreted as a relationship and it is regarded as the most significant indeed since it is the same as the sexual, loving affair and intercourse. “And Adam knew Eve his wife” – genesis narrates – and she conceived, and bare Cain.” In the Eastern Orthodoxy we don’t need the nomination of a special day as the International Day for the Preservation of the Environment, in order to remind us that we ought to respect the Environment, because in every Sunday Service and in every celebration when the faithful takes part in the Service of John the Chrysostom or of Basil the Great, he/she is encouraged to experience the relationship with God, with the other humans and with the environment. This thanksgiving action the faithful does signifies the recognition of the material world as a gift and as a blessing of God’s Grace and Love and not as a neutral object to be possessed and exploited, to be used and abused. That’s why the divine services of the two Hierarchs mentioned above are full of sacramentals and special blessings to God for the integrity and salvation of the material creation as a whole. “Visit us, Lord, with your kindness”, Basil the Great says, “Give us favourable and beneficial winds. Deliver to us peaceful raindrops for the fruition of the ground. Bless the current year with your kindness.” Let me refer to one more blessing from the Divine Service of Mark the apostle. “Pray for good winds and for fruit to be yielded from the ground. Pray for the harmonious raise of the river waters. Pray for blessing rainfalls and for the ground seeds. Send blessing rainfalls to where they are needed. Raise the river waters in moderation by your grace. Increase the ground seeds for seed- and harvest-time.”

SOLVING THE ENVIRONMENTAL PROBLEM IS NOT AN EASY TASK
Of course we are not deluded to believe that the great environmental problems are easy to solve. Great profits are at stake every day, which make the solution even harder. Civilization and economy nowadays are based not on consumerism but on excessive consumerism of the products. Thus, our planet is plundered and depleted in order to cover this need for excessive consumerism. We are all responsible for this plight either we believe in God or not. Unfortunately we all take measures that solve the problem only partly. We sometimes trust our governments which however, serve the interests of those who have sponsored their election campaigns, so they enforce laws for deforestation and building construction businesses. So we see houses and cottages in the place of the trees and forests we used to see, and all these houses belong to the elite of the society, lawyers, doctors, entrepreneurs and so on so forth. And some other times we trust people who declare to be ecologists just in order to be elected and as a result people and organizations that have pure ecological motives are slandered. Here in Greece we cannot forget that painful incident a few years ago when an ecologist female Member of Parliament obstinately refused to withdraw her position to someone else since this decision had been taken in advance among the ecological parties. Or stop to think how the Green party – one of the greatest ecologist movements in Europe – started in and how it ended up.

Yet, it is true that such sickly phenomena appear in the field of the Church as well. The Abbot of the Monk of Penteli in sued the head of a non-governmental ecclesiastical organization a few years ago because they wanted to take hold of the land of the church in order to turn a green paradise into a summer resort with hotels of cement. As you all know we live in the era of the ubiquitous cement!

If we wish to save our beautiful planet we ought to follow the path that the three Hierarchs showed. And this is no other than the path of love, of seeing the world as the creation of the free loving power of The Trinity God. If man believes in that he will force himself first and the authorities after to act in such a way that this gem called Earth will be saved.

THE LETTER AN INDIAN CHIEF SENT TO THE PRESIDENT OF THE
We would wish to end this article with an extract from the letter that the Indian Chief, named Suhami, sent in 1855 to the President of the , Franklin Pears who had asked Suhami to sell his land. “How can you buy and sell the sky and the warmth of the land? This idea is strange to us. The freshness of the air and the shimmering of the water are not our property. How could you possibly buy them from us? Every piece of this land is sacred for my people. Every tiny pine-needle that sparkles in the sun-rays, every sandy beach, the mist in the deep forest, every clearing in the forest, every buzzing bee, is sacred in the memory and in the experience of our people. We understand that white people do not comprehend our behavior. The white people see all places on Earth identical, because they act as strangers who come during the night and violently grab anything they need from the ground. They don’t see the ground as their brother but as their enemy, so after they have conquered it they move on, living it behind. This greediness and voracity will certainly devour Earth and only desert will be left. It hurts our eyes to see your cities. But then again, it might be due to the fact that we are a savaged people, unable to understand!”