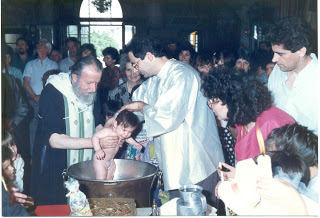 THE WELL–KNOWN TRICK OF THE HERETICS

As we all know, most heretics use the Holy Bible selectively, in order to support their arguments. In the same way, for the issue of infant baptism, they use sections from the Bible that refer to people being baptized at an elder age and overlook those that refer to children being baptized at an early age. The biblical reference they use to support their view is from the “Acts of the Apostles”, chapter 2, verses 37 – 38. This extract reports the query of the listeners of apostle Peter on the day of Pentecost, what they should do in order to be saved. And Peter replies: “Repent, and be baptized every one of you in the name of Jesus Christ for the remission of sins, and ye shall receive the gift of the Holy Ghost.” Therefore they claim that according to the Bible baptizing presupposes repentance, an action that only an adult can achieve through free will.

It is an undeniable fact that the above extract from the Holy Writ refers to being baptised at a mature age. However, heretics deliberately overlook the fact that Christianity did not exist as a religion at the time the Holy Writ talks about; hence those who decided to become Christians emanated from the two existing religions at the time, Judaism and Paganism. Consequently, it was reasonable for them to ask about every detail pertaining to Christianity and its teaching, so that they would decide if they would like to become members of the Church – which preached something new – through baptism. And our Church has never renounced this tactic. That’s why the Sunday Service, includes two parts; the Service for the faithful and the Service for the catechumen (those who want to be catechised).

Moreover, this applies even today to the various immigrants who want to become Christians. Before they are baptized, they participate in various Christian schools where they learn several things about our faith, e.g. Ecclesiastical History, Orthodox doctrines, hagiologic e.t.c. In fact, we taught in some of these schools a few years ago.

To sum up, our Church, very wisely, does the same as Christ. Christ did not discriminate and did not reject any one. On the same lines our Church treats everyone alike, and cares for every individual regardless of their age, especially for children, who Christ loved so much, and tries to bring them close to God from a very early age, with the sacraments of baptism, unction, and of the holy unction, as well as with the Holy Sacrament.

IS THE BIBLE AGAINST INFANT BAPTISM?

The Bible is full of sections fraught with references to infant baptism. Thus, in many points, the Bible mentions entire families who have been baptised by the Apostles and refers to their admission to Christianity. It is natural that those families had young children. However, nowhere in these sections appears any discrimination in the members of a family; on the contrary all the members are baptized. Some sections are reported below:

1. “And a certain woman named Lydia, a seller of purple, of the city of Thyatira, which worshipped God, heard us : whose heart the Lord opened, that she attended unto the things which were spoken of Paul. And when she was baptized, and her household, she besought us” Acts of the Apostles 16: 14 - 15.

2. “And he took them the same hour of the night, and washed their stripes; and was baptized, he and all his, straightway.” Acts of the Apostles 16:33.

3. “And I baptized (refers to Paul) also the household of Stephanas” 1st epistle to the Corinthians, 1:16.

Similarly in chapter 10 in the Acts of the Apostles, we have the description of the baptism of centurion Corneille and his family by Peter, as well as of close relatives and friends who were invited to listen to Petr’s preaching.

It’s also worth mentioning that the section the heretics allege that is against infant baptism, is chapter 2, verses 37 - 38, in the Acts of the Apostles mentioned above, but it actually turns against them like a boomerang. Because it does not refer only to the baptism of adults but also of children. And to prove this I also report the continuation of the extract which is deliberately ignored by the heretics in order to deceive. “For the promise is unto you, and to your children”.

CONNECTION BETWEEN CIRCUMCISION AND BAPTISM

Widely spread in the Old Testament (Genesis 17:10 – 12), circumcision was the sign of agreement (Testament) between God and the people of Israel. As it is well known, baptism apart from giving remission of sins, it is also the new sign of the new agreement (Testament) that God has made with his new people (Christians). The first agreement was material, the second is spiritual. And this is not an opinion expressed by us but by Apostle Paul in his Epistle to the Colossians: “In whom also ye are circumcised with the circumcision made without hands, in putting off the body of the sins of the flesh by the circumcision of Christ: Buried with him in baptism”. To the Colossians, 2:11 - 12.Therefore, we have to adress the following question to all the heretics: Since circumcision took place on the eighth day after a child’s birth, why shouldn’t the new ‘circumcision’ (baptism) be done to infants?

DOES DEVIL GIVE THE RIGHT OF CHOICE?

Coming now to the second argument of the heretics that the infant is not given the freedom of choice to choose whether he/she wants to become a Christian or not, because he/she is baptized at an early age, we refer the heretics back to the section we report in the beginning of our article – that is chapter 2, verses 37 - 38 from the Acts of the Apostles – which points out that baptism not only offers forgiveness of sins, but also the gift of the Holy Spirit. If therefore the infant isn't baptized to be liberated from the original sin, and due to this he/she is not blessed with the Holy Spirit, then who else but Satan will find the way to enter in to the non-baptized infant?

Is it ever possible for Satan to let man have the right of choice?
On the contrary, in the Orthodox Service of the sacrament of infant baptism, with the wishes of exorcism (“denounce Satan” etc.) which are said by the priest and the godfather of the infant, Satan flees away. Then with the sacrament of unction that follows immediately after baptism, the Holy Spirit comes to dwell into the infant. Thus as the infant grows gradually under the guidance of his parents and the Church, he/she takes his/her steps, as long as it is possible, in the ‘road’ of God. When children grow, it’s up to them to decide whether they will continue to walk in the ‘road’ of God or not.

THE CONCLUSION OF MATTHEW’S GOSPEL – A PUNCH ON THE HERETICS
We left for the end an extract from the Holy Writ, which not only proves without any doubt how infallible infant baptism is, but also proves the intellectual blindness of the heretics. Because it is the conclusion of Matthew’s Gospel, and we wonder why the heretics who all the time, as they claim, deal with the Holy Writ haven’t read about it . They have gone through this conclusion of course, many times, but they deliberately ignore it.

Without any other comments therefore we report this extract, which confirms what we have already claimed about Baptism. It is a command given by Christ Himself first to baptize someone and after that, teach him/her;

"Then the eleven disciples went away into Galilee , into a mountain where Jesus had appointed them. And when they saw him, they worshipped him: but some doubted. And Jesus came and spake unto them, saying, All power is given unto me in heaven and in earth. Go ye therefore, and teach all nations, baptizing them in the name of the Father, and of the Son, and of the Holy Ghost: Teaching them to observe all things whatsoever I have commanded you: and, lo, I am with you always, even unto the end of the world. Amen." Matthew 28:16 – 20