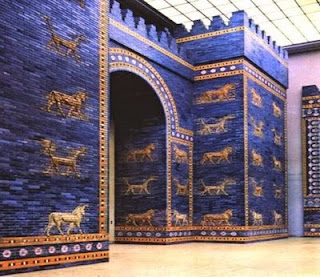 Thus, the purpose of the present article is to show what Christianity hired from the ancient religions which found and what was mutated or was abolished from them.

In particular, we will make a trip to the religious mores and customs of the ancient peoples, which many of them in the Christian believer today they seem as barbaric and unacceptable. In this trip we will have as a guide the great form of the ancient Greek historian, of Herodotus (485 – 421/415 BC). In his travels that made to the peoples of the ancient world, he recorded what he saw and heard in his book “Histories”. We hope that you find our journey interesting.

And we start with the people of the Lydians, who lived in Asia Minor. Herodotus speaks of a temple and how was funded the construction of this temple. We do not disclose it in advance, because it is worth a read of the text. We say, however, that - if he had done something similar today - it would be headline news in the media for several days:

“The land of Lydia has not many admirable, as they have other countries, except the gold nuggets from the mountain Tmolus. But he has to present a huge monument, which can to compared only with the monuments of Egypt and Babylon - this is the tomb of Alyattes, father of Croesus ... This task built by the traders, laborers and prostitutes. And in my time there were still at the top of the monument five votive columns engraved with inscriptions that they mentioned which part was constructed by each group. From the comparison arised that the girls built the most part, because all the daughters of the Lydian people until they marry are issued to make their dowry and they find the groom themselves”, Herodotus “Histories”, Book 1,93.

Next stop on our journey is the people with whom the ancient Greeks clashed many times and wrote the golden pages of Marathon, Thermopylae, Salamis, etc. From the Persians, Herodotus mentions many interesting issues, be they to their religion, either for morals and customs. It starts with a very interesting observation, that - for the gods - the Persians have more correct perception than the Greeks, who had anthropomorphic conceptions about them:

“For the Persians I ascertained that they have the following traditions: They not accustom to construct statues, temples and altars, those of them they build these, they consider them fools, because, as I conclude, the Persians did not believe, as the Greeks, that the gods have human form. Accustomed to offer sacrifices to Zeus, on mountain tops and they call Zeus, all the celestial sphere. They also offer sacrifices to the sun, the moon, the earth, water and wind.” Herodotus «Histories», Book 1,131.

After, Herodotus speaks for the custom of birthday and how they celebrate it, as well as what habits they consider as indecent, i.e. they should not be done in front of the others and how they behaved, when met each other in the street. Some of these we have today, but in a different way:

“Of all the days of the year the Persians believe that everyone must to celebrate particularly the day he was born. On this day they consider their duty to offer hearty meal. The rich offer an ox, a horse, a camel and a donkey, baked whole in the oven. The poor offer small animals ... Not permissible - when drunk - neither to vomit, neither urinate in front of an other one ... Two Persians when they meet on the street, one can understand if they are equal each other by the following: instead of talking to each other will kiss him on the mouth. If one is inferior, then the lowermost is kissing the other on the cheek. If it is too lower class, then kneels and kowtow him.” Herodotus «Histories», Book 1,133 – 134.

Continuing for the Persians, Herodotus speaks that they have the habit to be adopting the foreign traditions. From the Greeks they took the pederasty! As for what is considered prowess for Persians, those who having many children can enjoy! Such as also they could be happy and the single women, if they lived at that time in Persia. The Persians had the habit to have many women and concubines. Worthy of mention and admirable is the following. The Persians were accustomed to educate their children in truthfulness:

“Of all people, the Persians are those who adopt foreign traditions easier ... In war are using the thorax of the Egyptians. When they learn about different ways of enjoyment, they apply them, and from the Greeks they learned the pederasty. Everyone has many women and even more concubines.The largest male virtue, after the bravery in the battle, it is to have someone many children. Every year, to him who has the most children, the king sends a gift, after they consider that having many children is power. They teach their children from the age of five to twenty years old and they learn them only three things: horse riding, archery, and truthfulness”. Herodotus «Histories», Book 1,135 – 136.

The following episode is cute. Herodotus tells about the people of Caunus, who inhabited and these in Asia Minor. We will not prefaced that, not to spoil the surprise to the reader:

“Initially the people of Caunus built temples dedicated to the outlandish gods, but later they changed their minds (they had decided to worship only their own gods), all the men took their guns and beating the air with their flagpoles, went to the border of Kalyndos, saying that they drove out the outlandish Gods”. Herodotus «Histories», Book 1,172.

Herodotus, continuing with another people of Asia Minor - of Pidasos - narrates two strange events. One is how the priestess of Athena was making beard sometimes and how their god makes love with the priestess of the temple (!) :

“The people of Pidasos inhabited inland of Halicarnassus. When was going to happen something bad to themselves or their neighbors, the priestess of Athena was making long beard. This happened three times.

They themselves contend - but I do not believe in their words - that God often goes to the temple and lie down in bed with the woman, as namely happening in Thebes of Egypt, as the Egyptians say (because there, in the temple of the Theban Zeus sleeps a woman, and is said that these two women they do not lie down with any other man).” Herodotus «Histories», Book 1,175 – 182.

Below, Herodotus deals with two customs of the Babylonians. How they bury their dead and purifications that makes the couple when it comes in sexual intercourse:

“They bury their dead into the honey, and their burial laments are very similar to the lamentations of the Egyptians. When a Babylonian man will sleep with his wife, is lit incense and sitting near for purified. The woman is doing the same. Once will dawn, are washed both. Does not permit them to touch any receptacle prior to being washed. The same custom they have and the Arabs”. Herodotus «Histories», Book 1,198.

Next people, which we will see the traditions - through Herodotus always - are Massagetae. It was a nomadic people, probably Scythian origin, who lived in Persia. Although each man of them was married to a woman, all the women were shared (common estate). Anyone he could recline with whichever woman he liked, suffice to he was hang in her drawn carriage the quiver with his arrows. This custom that the Massagetae had, was not the only extreme, because the custom of death was much more extremist, since whoever he had reached in deep old age, voluntarily, was becoming a victim of cannibalism!:

“The traditions that they have is as follows: each man of them marries a woman, but nevertheless have their women as a common estate.  Because what they mention the Greeks as a Scythian custom, is not of the Scythians, but of the Massagetae. Namely, a Massageti man any woman who will yearn, he hangs his quiver in front of her drawn carriage and he mingles with her fearlessly. For the Massagetes the duration of human life is generally undefined. Only with one way is declared that the time of death has come: when someone reached in deep old age, then all his relatives congregate and they sacrifice him with the animals grazing. They bake their meat and they eat much. Therefore, this is considered the happiest death, while him who is dying from a disease they do not eat, but they bury him in the earth and they consider him as unhappy which not reached at the age to be sacrificed.” Herodotus «Histories», Book 1,216.

And we are completing with a custom of the Egyptians, which certainly shows the respect for the divine, always in relation to other nations. And it is none other than the non-intercourse in the temples, a custom - in their honor – that were holding and the Greeks:

“The first people who were designating as religious rule not to copulate with women in temples and not to come to the temple after intercourse if you do not have a bathroom, are the Egyptians. Almost all the other people except the Egyptians and Greeks copulate in temples and unwashed getting up from coitus and they are entering in temples, considering that and humans are like the other animals. This is because they see the other animals and the birds to copulate in the temples of the gods and in the sacred precincts. If, therefore - they say - it was not liked in god, then God will not let it becomes. They say so, but I think that they not behave properly.” Herodotus «Histories», Book 2, 64-65.

We believe that through this “journey”, the faithful will appreciate once again the greatness of Christianity, who tamed and the morals, but also was making humans to stands out from animals.