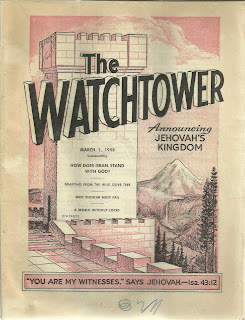 1. Jesus Christ and the angels threw down Satan and his demons to the neighbourhood of our earth!

Not directly, of course; for Jesus Christ is now enthroned at God’s right hand in the heavens, impossible for the nations to reach even by space ships. After his kingdom was born in the heavens in 1914, he at once began ruling in the midst of his enemies. He cast Satan the Devil and his demon angels out of heaven and down to the neighborhood of our earth, never to return to the heavens of God’s holy organization.

Comment; It seems that Christ and the angels had better anti –aircraft  weapons systems!...

2. Jehovah he will survey the battlefield of Har–Magedon and the enemy battle lines!

According to the way that Jehovah has acted long ago under given circumstances, he will survey the battlefield of Har–Magedon and take note of the deployment of the enemy battle lines.

3. A married woman who wants to pierce her ears, should ask her husband!

A married woman who favors having her ears pierced should rightly consult her husbandly head first.

Comment; To put lipstick should ask the … best man?

4. No man has seen, to operate the vocal organs of Jehovah!

Consequently, no human of flesh and blood has ever been able to see Jehovah’s speech organs in operation, but some humans have heard his voice.

Comment; They are driving us mad! In a while they will tell us that God has and ... genitals too!

5. JWs should be washed and bathed, to be clean and the Organization!

Therefore, if you are a dedicated servant of Jehovah, it is important for you to see that you are washed and bathed, that you are neatly dressed in clean clothing, that you look respectable and presentable before you engage in the witness work or before you go to the Kingdom Hall. Thus onlookers who are watching will recognize even by your personal appearance that this is God’s clean organization.—2 Cor. 7:1.

Comment; Do the nails have to be cut, and manicure done as well?

She offered him the forbidden fruit, in verification of her own sin. Then Adam faced his first marriage problem! God was not there to ask.

7. The sex organs are not to be treated as playthings!

Accordingly, God created man and woman with sex organs for a wonderful purpose in harmony with the divine will. These sex organs are therefore not to be treated as playthings, nor are they to be abused, misused or misapplied.

Comment; Why, is there a possibility to ... stretched out?

And then there are the great body of angels or spirit messengers. We are not to think of these merely as errand boys but as agents and deputies, not only serving as a means of communication but also carrying out God’s purpose, be it the protection and deliverance of his people or the destruction of the wicked.

9. The angels travel at tremendous speeds!

In this respect holy spirit from Jehovah has been likened to electricity, which may serve for illumination, or as a means of communication, or as a powerful force accomplishing great amounts of work.

Comment; If the fuse blows, what are we doing? No fuse, no electricity?

What if the people would not listen? What if they did slam the door in my face or chase me with a broom?

12. JWs were being tarred and feathered!

I learned a lot from these veterans in Jehovah’s service. They had just come out of Nevada, where they had narrowly escaped being tarred and feathered.

Comment; It was with them and Lucky Luke with Daltons?

13. God invented the grammar! God is the greatest Grammarian!

He created all their vocal powers, to speak their language with the appropriate grammatical style. He invented their grammar for them. God is the greatest Grammarian.

14. JWs asks the Organization if you need to take painkillers!

● Is it wrong for a Christian to use a painkiller, since Jesus at his impalement refused wine mixed with a painkiller?

Comment; I want to make a gargle for sore throat! I must ask the JWs Organization?

15. In 1914 became a real fight in the Heavens, between angels and demons!

That this conflict was a real fight can be seen from Daniel 10:13, which tells of an instance where one of God’s angels was held up for twenty-one days by one of Satan’s demons.—Rev. 12:7-9.

Comment; How many were killed and wounded, angels and demons?

16. The transfusing blood, will transfer the personality of the other!

Transfusing blood, then, may amount to transfusing tainted personality traits.

Comment; If you take the blood of a thief, will you become thief as well?