THE PRECURSORS OF CHRISTIAN MONASTICISM AND ASCETICISM: PYTHAGORAS – PYTHAGORISM 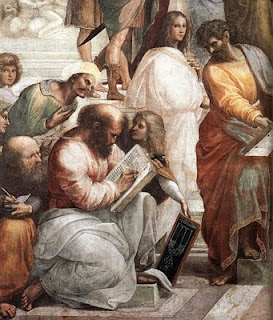 Pythagoras
he main characteristic of the ancient Greek religion as developed through the two masterpieces of Homer's epics, the “Iliad” and “Odyssey” and from Hesiod in his “Theogony” is the anthropomorphism.  Be presented namely the Gods with human passions and actions, which of course only to gods do not match, so the man made a game into the hands and the passions of the gods...

«Someone Pythagorean man, after a long and arduous march on a deserted road, reached in an inn, where due to the suffering of this, became seriously ill. He had not, however, the needed money for his health care. But to the innkeeper - who nevertheless took care of him movingly - before dying, left a billboard with a symbol, and told him to hang on in his shop, because the first who will recognize this symbol and he will be informed the details, will reward him richly. The innkeeper - although not hoped would never recover what he had spent - he performed his desire and hung in a conspicuous place a billboard with the symbol. And indeed, after a long time someone Pythagorean, who recognized the symbol, rich and gladly paid the expenses». (Iamblichus 239)

With quietness and silence are closely related the self-control and the exercise of memory. It is known the recommendation of Pythagoras to his disciples, as we are informed by Diogenes Laertius 8.22: “What I did, that ought not? What I did, that ought? What I had to do and I did not?” The memory ought be practiced, to be able to keep the teachings. Therefore, never ceased to dealing repeatedly with the Taught, until it becomes their estate. And the way they exercised his memory was: Before Pythagoras to get up from his bed was required to remember everything that had happened the previous day in turn. What he said or what he heard just got out of bed, what was first and what second, what happened, who met first and who second and what discussed with them.
Following the exercise of memory, the Pythagoreans venerated much the medicine and the music for moralistic reasons. From medical were mostly occupied with the “arbitral kind”, order to be precise in their diet, with the knowledge of the symmetry of foods and beverages. They did this because they wanted to keep their bodies in stable condition, so that to be not, sometimes thin and sometimes thick. The music also contributes to the health of the body and is - especially for the soul - a major means of catharsis. Indeed Basil the Great our it rescues the following incident with Pythagoras and the therapeutic property of music: “It is also said that Pythagoras, when once he met drunken dancers, who were singing making ugliness on the streets, begged him playing the flute and he was the head of this orgiastic procession to change harmony and with the flute to play them the Doric member of the musical melody. Then, with this melody they thought correctly, so - after they threw away the wreaths - shamefully they turned again to their homes”. To the young, E.P. 31, 581-584.
Pythagoras and his disciples - in relation to the soul - accepted the teaching of reincarnation or meta-incorporation. It is said that Xenophanes who mocked this teaching, presents him to berate his student, which wanted to hit a barking dog, because in the barking of the dog he recognized the voice of a friend.
Himself Pythagoras was telling for himself that he remembers his various incarnations. Indeed, he attributed this gift as a bonus of Hermes to his face.
The cycle of reincarnations was intended to liberate the soul from the shackles of flesh by chastity, purity and exercise and return to the hearth, to God. There is i.e. also in the Pythagorism the view of a drama of the soul, that was removed from God and is struggling to terminate the cycle of reincarnations, to come back to him. The soul is immortal, because that from which was detached is immortal. Is divided into three parts: mind, wisdom and anger. Mind and anger have and the animals, but wisdom only in The seat of the soul is the section between the heart and brain. In the heart dwell the anger, mind and wisdom in the brain. Immortal is just the prudent part of the soul. The veins, arteries and nerves are shackles for the soul. Diogenes Laertius 8.28 to 31.
They are interesting and the ascetical teachings of Pythagoras. Were forbidden to eat living creatures, not only because of the theory of reincarnation, namely about the presence in these of human souls, but mainly to get used to the austere and ascetical life, a factor of physical and mental health. For him were sufficient only: honey, wax, vegetables and bread. He not was drinking wine, nor was he seen never to entertains, without aphrodisiacs passions, or to inebriates. He shunned the laughs, the flatteries, the burdensome narrations and the teasing. Diogenes Laertius 8.13 to 20.
Indeed, he was teaching that this practice in nutrition and dressing should begin in the childhood. Most of the wishes of the people are acquired and manufactured by themselves, so it required a lot of attention and exercise regime. The Pythagoreans criticized the prim food, the sumptuous costumes, the spacious and luxurious house. Iamblichus 205
This strictness of the Pythagoreans in diet and dressing was the cause for mimicry by many. It is said that the comedienne Aristofontas in narration refers to someone, who visited Hades and he saw the Pythagoreans to differ from everyone and are eating together with Pluto because of their piety. And define, what the comedian responds: “It must be very convenient this god, who delights to hobnob with people unwashed, without taking bath, who are full of lice”. Diogenes Laertius 8.37
Ascetic attitudes we find in the position of the Pythagoreans towards sexual life and marriage. Himself Pythagoras was married with children. He condemned the satisfaction of carnal momentum outside of marriage, but he was accepting within marriage for childbearing, because the man leaves in the world, adorers of the gods.
According Hieronymus, Pythagoras descended into Hades and he saw the souls of Homer and Hesiod to punished severely for what ungodly they said about Gods, and together with them to punished the souls of those who refused to copulated with their wives. This attitude towards marriage resulted to be honored by the residents of Croton. His pupil Theano, according to others his wife, when asked if the intercourse with a man is impurity she responded that only with a foreign man is so. General, Pythagoras was against to the aphrodisiac hedonism, because they make the man weaker.
In the 4th century BC the Pythagorism falls into decadence because of the terrible persecution which was brought against the Pythagoreans and revived as Neo-Pythagorism in the 1st century BC, but mainly in the 1st century AD with the great form of Apollonius of Tyana.
But this is another issue that we hope to negotiate in the future.