THE “DRACULAS” OF THE “WATCHTOWER” ARE THIRSTY FOR OUR BLOOD! 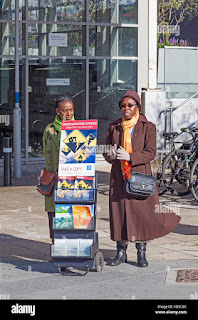 It is a fact that, in general, Jehovah’s Witnesses (JWs) give the impression of benevolent individuals full of love and affectionate interest for their neighbour, of individuals that can never be malicious towards their neighbour even when they are persecuted by him. They even claim something like that for themselves, comparing themselves with harmless sheep that are distinguished for their complete lack of hatred and animosity.

Yet, is this true?

Unfortunately, although we would love to agree and not to be presented as the bad guys in this case, the publications of the Company do not allow us to do so; which publications can only cause terror, abhorrence and profound contemplation as they give vent to intense rage and to an unusual and inexplicable hatred against all those who don’t belong to the Organisation.

But before we disclose the publications of the “Watchtower” concerning the particular issue, we need to explain certain things, so that what we say will be comprehensible even to those who have not been used to the phraseology and teaching of the Society.

THE INSISTENCE OF JWS ON DOOR-TO-DOOR PREACHING

Well, using ‘brainwash’ as their main technique, the Society has turned its followers life into a misery as they sleep and wake up having only one thought in mind; that Armageddon is ready to break out at any moment. For those who are not aware of Armageddon we have to explain that it is a place in Israel where an epic but symbolic battle between good and evil will take place before the Second Coming of the Lord. JWs, however, take this battle literally, so at night while they are sleeping they dream of wars, slaughters, blood.
That’s why they show such eagerness and persistence – inexplicable to most people, though – in door-to-door preaching. Because they are intimidated by the Society which uses psychological violence to convince them to go on preaching, because if they stop (as the Society says) they are more likely to meet their own annihilation when Armageddon breaks out as they are totally unlikely to resurrect during the Second Coming of Christ.

And to dissolve any doubts you might have about this, we quote the following extract from the “Watchtower” of December 1964, pp. 754 – 5. As you will see it is so explicit about the issue that any additional comments are unnecessary:

§ 29 Let the Christian witnesses of Jehovah who preach his kingdom also beware. Why? Because Almighty God can also make a judicial decree against the resurrection of any dedicated, baptized Christian if this one fails to carry out his dedication to God fully and if he yields to the fear of murderous men and quits the preaching of God’s kingdom that is prophetically commanded in Matthew 24:14. Thus Jehovah God is able to destroy both soul and body in Gehenna, in everlasting destruction. Is that not a reason for dedicated, baptized Christians to fear God rather than men and therefore to continue obeying God’s orders to preach this good news of His kingdom? Is it not a compelling reason for them, in fear of God, to obey God as ruler rather than mortal man?

And although all these seem comic and incredible to us, the witnesses take them seriously, due to their low educational level, and in some cases they take them so seriously that comical events are caused.

Once, an acquaintance of mine who worked for a Society a Jehovah’s Witness owned, narrated the following cute episode. One morning, a female Jehovah’s Witness visited the Society in order to ask the owner if he could recommend a dentist because she had a problem with her teeth. But since the businessman was absent and the Jehovah’s Witness could not wait for him any longer, she decided to ask my acquaintance, if it was worth spending so much money on fixing her teeth now or if it was better to wait for… Armageddon, when her teeth would be fixed without any cost!

“DRACULAS” OF THE WATCHTOWER

Beyond the comic side of the issue, however, we believe it’s time to wonder, how it is possible for the “Watchtower” on the one hand to claim that it represents God, who is a God of love and forgiveness, and on the other hand to wish the annihilation of its enemies in a tragic and painful way.

Do you recognise any of the love that the Lord had when he forgave even his enemies – and this became Christianity’s motto – at the moment he was crossed, in phrases like: “those who stand on the way of the preachers of the Kingdom, meaning Jehovah’s Witnesses, will be ripped apart”! Or after the end of the war of Armageddon, in words referring to the Witnesses who will have survived “the stones and the ruins must appear beautiful to them”! with the word beautiful written in bold!

Nowhere in the above extracts could we identify any sign of true Christian love. What we did identify is a type of sadism that finds pleasure in other people’s destruction and misery. And this sadism reaches its climax, in the Watchtower of 1st November 1967, pp. 659 – 660, paragraph 18, where you can find a text entitled “None of his enemies to escape” and deals with what is going to happen in Armageddon. A text which is really hideous and when we first read it we could not believe our eyes. In this text the Society not only calls us disgusting (abominable) enemies (!) who do not deserve a decent burial, but also, continuing this delirium of horror, claims that some JWs will wash their feet with our blood which will be poured in the war of Armageddon, and some others like thirsty draculas will lick it! And even more hideous than that, is that, according to the Society, all these will happen with the approval of God!

§ 18  To what? To face slaughter, that their lifeblood might be poured out. This will enable the true followers of the Son of David, in effect, to wash their foot in the blood of their enemies. No decent burial will be given such detestable enemies, but, if we have any Biblically despised dogs in our service, God will let them lick up the blood of the enemies against whom God has arisen.

Here let us make a parenthesis in order to explain the characterizations used for the followers of the Society, so as to make sure that the text above has become comprehensible, and moreover so as to answer in advance any objections that any Jehovah’s Witness might have.

Well, the Society misinterpreting and altering an extract from the book of Revelation, chapter 7, verses 1-9, distinguishes its followers into two categories. Those, who according to the “Watchtower”, will live in Heaven and lead the kingdom together with Christ, and who amount the 144.000, and tose who belong to the Herd (to which category most JWs belong) who will live on Earth in a Paradise-like state, and God with the selected 144.000 will govern them. Only the 144.000 are considered as the real Church by the Society, as the genuine Israel (= population of salvation), hence these are the ones referred to in the text as the followers of the Son of David, that is to say Christ. The rest of the JWs are believed to be the servants of the 144.000 and they are sometimes referred to as Gibeonites. Those are the ones who are called Biblical dogs in the text, since the dog is considered the companion and the servant of humans. The first therefore are those who will wash their feet in our blood that will be poured and the latter are those who will be allowed to lick our blood.

In conclusion we point out that the Society has managed to instil an unusual hatred, instead of love, in its miserable followers, hatred against anyone who is not a member of the Organisation, the so-called Godly hatred. This “Godly hatred” has created problems in the mental and psychological balance of Jehovah’s Witnesses and has led them to various abnormal behaviour and activities.

According to Gunther Pape, a former high-rank member of JWs in Germany, the testimony of whom His Beatitude Father Anthony Alevizopoulos invokes in his book “The Worship of the Watchtower”, volume B pp. 310 - 311, (Greek edition) a female Jehovah’s Witness in Wurzburg, in Germany, killed her brother’s wife.

Something similar but even worse happened in another city of Germany, in Ludwigsburg, where a Jehovah’s Witness went mad, took an American soldier’s light machine-gun, dashed into the Royal Hall (a building where Jehovah’s Witnesses gather) and riddled 16 individuals with bullets. Also another JW destroyed churches and altars because he believed that those represented Jehovah’s enemies.

We also have testimonies of former Jehovah’s Witnesses that lots of the members of the Societynot withstanding playing this dual role – pretending to love while they actually hate – suffer from schizophrenia and are under medical treatment.

No wonder schizophrenia appears in JWs poles since many times they are called upon to believe and to teach such contradictory things as in the example that follows. In the book of the Society “You can live forever” on pp 16 and 17 we read that human governments belong to Devil and that we can also find the corresponding references in the Holy Bible to support this:

§ 5 Think about what the Devil offered Jesus Christ. It was “all the kingdoms of the world.” Did all these worldly governments really belong to the Devil? Yes, for how else could he have offered them to Jesus? Jesus did not deny that they were Satan’s, which he would have done if Satan did not own them. Satan is really the unseen ruler of all the nations of the world!

“You can live forever”, pp 16 and 17, the human governments belong to Devil

However, in another issue of the Society, that of course is no other than the official magazine of the Organisation of JWs, The Watchtower, and specifically in the issue of 1st September, 1998, p. 16, is reported that – again according to the Holy Bible – the human governments belong to God, who placed them in the world!

§ 11 According to the Bible, human governments “stand placed in their relative positions by God.” Jehovah, the Source of all authority, permits governments to exist, and he expects them to do good to those under their jurisdiction.

After all these, do you think it is possible for the poor follower of the Organisation to avoid going nuts?

As for the end of this article we left a really shocking document. It is extracted from “The Watchtower” of 1st March 1997, p 9 and it shows how the Society and Jehovah’s Witnesses see Christ.

It is a photograph which shows Christ on a horse holding his glittering sword and the holy Angels follow behind him, holding their sparkling swords, too, and they are advancing, howling, ready to slaughter  all of us who do not belong to the Organisation of “the Watchtower”. Observe the unusual and horrible hatred, the rage depicted on the faces of Christ and the holy Angels and wonder: Is this the God of LOVE, the God who met the most humiliating death, the death of the Cross, in order to save his creature? 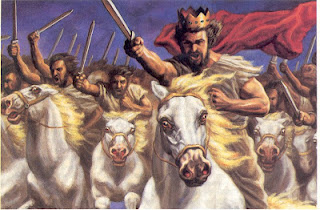 The Watchtower of 1st March 1997, p 9, Christ and the Angels are advancing to slaughter all those who are not Jehovah’s Witnesses