Why the Roman State did not accept Christianity as a rightful religion (RELIGIO LICITA)? 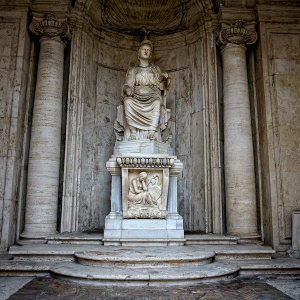 Contrary to Antiochus IV Epiphanes, who with the help of Jewish apostates has tried in 167 BC to introduce the Greek pagan religion, by placing the statue of Zeus in the temple of Jerusalem and to force the Jews to the observance of Greek customs, leading to the outbreak of the revolution of Maccabees, the Romans - when captured Judea - not only respected the unique monotheistic religion of the ancient world, but also the rules of everyday life of the Jews, arising from this...

And this behavior was not an exception, but it was settled tactics to respect every people of the empire that had the right to worship the "national" God, according to his traditions. Therefore, since the Jewish religion was the ancient and patrimonial religion, immediately was enshrined and  had been entitled, earning the right of “religio licita”, namely of the permitted religion from the state. The Jews, the only thing they had to do was to offer sacrifices in honor of the emperor of Rome. And indeed the Jews were doing in daily sacrifice at the temple in Jerusalem and they made the relevant prayers in the synagogues scattered in the Roman territory.

So, having regard to the behavior of the Roman tolerance by law even against all the ancient religions, the question is born, why did not show this tolerance in the case of Christianity and the God of the Christians was not included in the Roman pantheon, resulting in the state to persecute violently several times their own nationals, who had embraced the Christian faith itself?

The argument, which alleges some, was that Christianity is monotheistic religion and therefore was not accepted, it cannot be true, because then, neither the Jewish religion would be legal. Moreover because of this, and probably themselves Christians looked forward to something similar, but ultimately did not happen to them.

As most basic reason was the fact that for the Roman perception of religious things, Christianity was not keeping those conditions which characterized the other religion of empire. It was not namely the traditional religion of a city or a nation. As we know, from the sanctuaries writings and traditions of Christianity believed in the universality, above and beyond any race, nation or city, so those who was coming to him and was becoming members to be of any ethnicity and religion. As a result, Christianity of not keeping the general principle of the empire, i.e. the respect of religion of a people or a city, so as to make “religio licita”, namely allowable religion. And not only that, but the abandonment of the dedication to the religion of native city or people of origin could be considered - as indeed was considered sometimes - as an act of disrespect, in which imposed various legal sanctions.

An equally key reason was the close connection between politics and religion, because the recommendation of the Roman state, which been one empire. As we know every empire consists of tribes and nations which many of them are enemies to each other thereby creating centrifugal forces of disintegration and dissolution. Care therefore of every imperial power is to find, those unifying elements that will prevent this risk. So the Roman power was deifying each emperor and the city of Rome, in which ought to attribute religious honor and reverence by all the inhabitants of the empire, by participating in various religious ceremonies they were becoming for this purpose, offering sacrifices to the emperor's statues and of Rome.  In these ceremonies, by reason of the Gospel teaching, Christians refused to participate because they could not accept neither the emperor nor the Rome as a God, thereby automatically was becoming answerable for impiety and suspects consecration crime, which they drew prosecution. Namely their crime, except religious, was and political. Testimony about this, we have in the letter sent by the provincial governor of Bithynia, Plinius the Younger to Emperor Trajan and concerns the procedure prosecution of Christians. Among other writes to him, that asking them to "venerate his statue and the images of the gods (he mean of Rome)" and offer incense to "his statue and at the statues of the gods."  The head start that gives at the statue of emperor shows and the political dimension of the issue. Consequently the refusal of Christians was a revolutionary act against the emperor, which although possibly was done acceptable, could create problems, since if he found and imitators (except Christianity), could threaten the cohesion of the Roman Empire.

An additional aggravating reason for the legalization of Christianity was the way of life of Christians, which was a corollary of their faith. Their way of life was different from the other inhabitants of the Roman Empire, so they do not mix with non-Christians. As a consequence - due to lack of accurate information - to be formed a veil of mystery around anything Christian originally was transformed into prejudice and later at a hate of the people against Christians.

So with this in mind, the Roman authorities could not allow to the Christians the free worship, nor of course much more to be proclaimed Christianity as an allowable religion (religio licita). But assuming that Christianity was recognized as an allowable religion is not at all certain, that Christians would be exempt from the mandatory obligation of all nationals of the empire to recognize and participate at least to the worship of the emperor and of Rome. For the Roman authorities this was unthinkable and illegal, and moreover there were laws that were related to the categories of such offenses. Contrary for the Christians, the participation in these ceremonies meant denial of faith to the One and unique God, which was considered a very heavy sin.

And so they began the persecutions of Christians ...