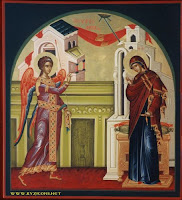 It is a fact that all the heresies or the followers of any other Christian doctrine – Jehovah’s Witnesses, Pentecostalists, Evangelicalists, etc. – degrade Virgin Mary as a figure. More specifically all kinds of heresies support that: Virgin Mary had other children too, apart from Jesus...

The honours we do and the blessedness we, Orthodox Christians, attribute to Virgin Mary are not suitable. And in order to justify their rejection of the virginity of our Virgin Mary such heresies are based on the following two passages of the New Testament. The first one is from the Gospel according to Matthew, and it refers to the angel prompting Virgin Mary’s fiancé, Joseph, not to hesitate to take Mary as his wife although she had been found pregnant. “Then Joseph being raised from sleep did as the angel of the Lord had bidden him, and took unto him his wife: And knew her not till she had brought forth her firstborn son: and he called his name JESUS.” (Matthew, 1:24 – 25)

The second passage comes from the same Gospel and refers to the incident where Jesus is being sought by his mother and “brothers”. “Is not this the carpenter's son? is not his mother called Mary? and his brethren, James, and Joses, and Simon, and Judas? And his sisters, are they not all with us?” (Matthew, 13:55 – 56)
Combining these two passages from the New Testament the heretics, draw the blasphemous conclusion that Virgin Mary after giving birth to Christ had a sexual relationship with Joseph and she was the one who gave birth to the children that are reported as Christ’s brothers.

WHAT DOES THE WORD “TILL” MEAN?

Commenting on the first passage, we observe that the expression “till” on which the heretics are based in order to support their view that Virgin Mary did not remain a virgin for ever, is a Jewish idiom, from those that every language has. It does not mean that some change will necessarily occur; hence it doesn’t mean that after Christ’s birth there was some change in the relationship of Joseph and Virgin Mary, and we can certainly not infer that a sexual relationship started between the two after Christ’s birth. Let’s take another example from the English language, which will help us become more comprehensible with regard to the idioms in each language. If for example you find yourself at a railway station and you ask about the itinerary, but for some reason you haven’t been able to hear the departure time that intersets you, you will most probably say, ‘Sorry, I didn’t catch that!’ By saying this you are just requesting repetition of the specific departure time, and one would certainly be considered a fool if he infered that you didn’t catch something that has been thrown to you. It is certain that a sentence can have multiple meanings, but this multiplicity doesn’t mean that any sentence or expression can mean anything at all in complete disregard of the general meaning of the sentence.

Going back to the word “till” now, if we follow the heretics’ explanation of the word and apply the meaning they give to “till” to other passages of the Holy Writ where the same word appears, we will reach hilarious conclusions. In the book of Kingdoms B΄ (Samuel B΄), chapter 6, verse 23 we can read: “Therefore Michal the daughter of Saul had no child unto the day of her death.” Similarly, in Paul’s epistle to Timothy A΄, chapter 4, verse 13 we can read: “Till I come, give attendance to reading, to exhortation, to doctrine.” If we apply the same meaning of the word ‘till’ or ‘unto’ here my dear heretics, we deduce that Michal gave birth to a child after her death and Timothy stopped being assiduous after Paul’s arrival!

It is obvious, though, that the Scripture actually wants to say that Michal, Saul’s daughter, never gave birth to a child in her life, and Paul prompts Timothy always to be assiduous.

DID VIRGIN MARY HAVE ANY OTHER CHILDREN?

Let’s see now if Christ’s brothers – the ones that the New Testament refers to – were actually Virgin Mary’s children. First of all we need to make a distinction between what is inferred by the term “family” nowadays and how far the meaning of the term extended at the time of Christ. To be more convincing we will let an expert speak for this subject, the French Academic writer Henri Daniel Rops. In his book “Daily life in Palestine at the time of Christ” on page 139 (Greek edition), he writes: “The term ‘family’ had a range of meanings which was broader than the meaning it has today. In Aramaic the word ‘aha’, in Jewish ‘ah’, meant brother, step brother, cousin, even close relative”.Any heretic could say that he is not interested in what a French writer says about the Holy Writ, and he could claim that he’s only interested in what the Holy Writ writes. Daniel Rops, however, has not been selected at random. He has studied the Scriptures thoroughly and to prove what he says he refers to the book of the Holy Writ “Genesis” where Abraham calls Lot’s nephew, a brother. “And Abram said unto Lot, Let there be no strife, I pray thee, between me and thee, and between my herdmen and thy herdmen; for we be brethren.” (Genesis, 13:8) Similarly in the first book of Chronicles, the sons of an Israeli man named Kish, are characterized brothers and sisters with the daughters of another Israeli man called Eleazar, while they are actually cousins. “And Eleazar died, and had no sons, but daughters: and their brethren the sons of Kish took them.” (Chronicles 1st, 23:22)

That’s why our Church believes that the ones reported as brothers of Christ, are his step-brothers, from Joseph’s first wife. The Texts of the New Testament are illuminating to the fact that Virgin Mary never had any sexual relationship with Joseph. Because after Christ’s birth, Virgin Mary is always referred to as the mother of Christ and never as Joseph’s spouse, exactly to show that they never had a sexual relationship.

And when Christ was twelve years old and went up to the Temple of Jerusalem to prostrate with Joseph and Virgin Mary, we read once again in the Gospels: “…the child Jesus tarried behind in Jerusalem; and Joseph and his mother knew not of it.” (Luke, 2:43-44). It is worth noticing here that a fourth person is never mentioned, neither while they were going up to Jerusalem nor while they were looking for Christ. If Joseph and Virgin Mary did not have any other children then, after twelve years of living together, then when were so many sons and daughters born?

At this point I would wish to address a question to all heretics. When you want to introduce your wife to somebody, what do you usually say? “Here’s the mother of my children” or “Here’s my wife.”
On the other hand even James who is reported as Christ’s brother, in his catholic epistle, he dissolves any doubts we may have about this, “James, a servant of God and of the Lord Jesus Christ…” (James, 1:1) What we have here is that the so-called brother of Christ introduces himself as a servant of Christ, and not as his brother.

Last but not least is the unprecedented incident that happened to Virgin Mary above all women on Earth and regards her virginity, of course. While, according to the heretics, Virgin Mary had so many sons and daughters, Christ on the Cross does not trust anyone else to look after her, but John the Evangelist who is a relative, not even a close one!

And we have to ask heretics all over the world. Do you do the same with your elder parents? Do you assign their care to distant relatives?
Since it’s getting beyond a joke, I think we should get serious. If the ones that are reported as brothers of Christ, were genuine children of Virgin Mary, they wouldn’t have been able to live in the narrow circle of Nazareth any more. Because we should not forget that one of the Ten Commandments was “Honour your father and your mother”. And having their mother being looked after by a distant relative was certainly not an honour.

With regards to the question why we honour and bless Virgin Mary, there is a very simple answer. Because she herself prophesied what was going to happen when she visited her relative Elisabeth, the mother of John the Baptist. “…for, behold, from henceforth all generations shall call me blessed.” (Luke, 1: 49)

So, that’s what we do with the Salutations to celebrate her Annunciation (Religious sequences of the Orthodoxe Church that are heard every Friday afternoon, for four weeks from March to April) and with the prayers and devotions on August 15th to celebrate the Assumption of Blessed Virgin Mary (Prayers of the Orthodox Church heard every afternoon for the first fortnight of August). We honour and bless her because she was honoured to become the sacred carrier through whom God selected to be incarnated and save us from sin with his death on the cross.