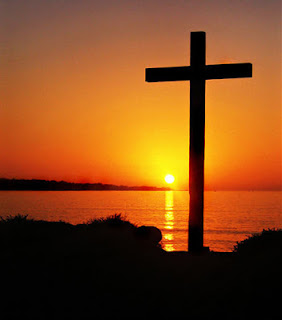 The early Christians used various symbols either to honor Christ and the Saints or to denote their Christian Faith or even to decorate the catacombs where they gathered to celebrate the Mass, since the Church and their faith were persecuted back then. Thus, they used to draw a fish (ΙΧΘΥΣ in Greek means fish), the acronym of which denotes Jesus Christ, a mythical bird, the Phoenix, which symbolizes the eternity of the soul, hope, etc.


However, among the symbols used the Cross held a special position. So, wherever we may look inside or outside the Church, we’ll come across the Cross.  It exists in the liturgical books, in the place of the Mass; it accompanies the holy service and every individual prayer of the faithful people. Last but not least, it’s a honor for quite a few of us to carry it with us, not because it is in vogue, but for the invigorating power it has with which it beats the dark powers and death.

The fact that the Cross is a symbol of victory is obvious in the Lord’s words. It is marked with glory and erection, which aims at our own erection. We read in John’s Gospel, chapter 12, verses 23-33: “And Jesus answered them, saying, The hour is come, that the Son of man should be glorified...... And I, if I be lifted up from the earth, will draw all men unto me. This he said, signifying what death he should die”.

Lord on the Cross is presented as if he were on a triumphal chariot. Victoriously, He draws the demons on this triumphal chariot to hold them up to public ridicule and overtly disgrace them in the eyes of the spiritual world: “Blotting out the handwriting of ordinances that was against us, which was contrary to us, and took it out of the way, nailing it to his cross; And having spoiled principalities and powers, he made a shew of them openly, triumphing over them in it”. Apostle Paul in his epistle to Colossians, chapter 2, verses 14-15.

This is why the Lord’s Cross does not look like the thieves’ crosses, because His Cross is not a weakness but a strength, it’s not a shame but a pride: “But God forbid that I should glory, save in the cross of our Lord Jesus Christ, by whom the world is crucified unto me, and I unto the world”. Apostle Paul in his epistle to the Galatians, chapter 6, verse 14.

Well, the Cross that we take pride in is a symbol of stupidity for the unfaithful, the irreverent, the heretics and a symbol against which they turn. Those miserable people do not understand that this way they play their father’s game who is no other than devil, and this game will lead them to their destruction:  “For many walk, of whom I have told you often, and now tell you even weeping, that they are the enemies of the cross of Christ: Whose end is destruction, whose God is their belly, and whose glory is in their shame, who mind earthly things.” Once again Apostle Paul in his epistle to the Philippians, chapter 3, verses 18-19.

Jehovah’s Witnesses vehemently turn against the Cross and blame Christians for being idolaters because they claim that the honors we pay to the Cross equal idolatry and the Holy Scriptures forbid reverence and worship of objects which exist on Earth in the sky or in the water. But before we examine whether what Jehovah’s Witnesses say is true or not, let us point out something that most faithful ignore, a truth that the above mentioned heretics deliberately withhold; the fact that for over 60 years, and more specifically from 1870 up to 1931, Jehovah’s Witnesses revered the Cross and held the Cross in high esteem. It decorated their buildings and the front cover of their first-rate magazine, the “Watchtower”, and they also wore it as a badge on their lapels. And before they hurry to blame us for being liars and slanders, we quote the following document from their book “The Proclaimers of God’s Kingdom” which includes all the history of Jehovah’s Witnesses. On page 200 you can read everything we said above:
For years, Bible Students wore a cross and crown as a badge of identification, and this symbol was on the front cover of the “Watch Tower” from 1891 to 1931. But in 1928 it was emphasized that not a decorative symbol but one’s activity as a witness showed he was a Christian. In 1936 it was pointed out that the evidence indicates that Christ died on a stake, not a two-beamed cross 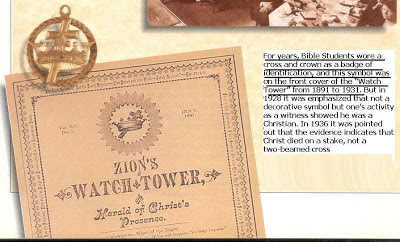 And to make them stop once and for all we’ll bring a rare document into light a document most of Jehovah’s Witnesses ignore the existence of. This rare document comes from another publication of the Society entitled “Book of the Year 1975”. What we read on page 38 can be described unique and shocking; that Carl Russell, their founder, had the brilliant idea to publish a magazine IN ORDER TO LIFT THE SYMBOL OF THE CROSS. And which do you think this magazine is? Of course their official magazine “Watchtower”, through the pages of which they believe that Jehovah Himself speaks! We won’t make any further comments:
‘A DAY OF SMALL THINGS’
Writes Russell: “I therefore understood it to be the Lord’s will that I should start another journal, in which the standard of the Cross should be lifted high, the doctrine of the Ransom defended and the Good Tidings of great Joy proclaimed as extensively as possible.”
C. T. Russell took it as the Lord’s leading that he give up traveling and begin publishing a journal. Thus in July 1879 the first issue of Zion’s Watch Tower and Herald of Christ’s Presence made its appearance. Now known world wide as The Watchtower
Book of the Year 1975, p 38: Carl Russel brought out the journal “Watchower” to lift the symbol of the Cross!
Now, since we have resolved the accusations against the symbol of the Cross imposed on us by Jehovah’s Witnesses, it is time to deal with the accusation of idolatry. But first we’d like to clarify a couple of small points; what idolatry is and when an object is considered to be an idol. Well, idolatry exists when we believe that an object equals God or we think that the object represents God.  As the book of “Exodus” informs us while Moses was ascending mount Sinah to take the 10 commandments from God, Israelites convinced his brother Aaron to make a golden calf which they worshiped as their God. It’s worth quoting Aaron’s words “These be thy gods, O Israel” (Exodus, chapter 32, verse 2). And we can’t but wonder now; Which Orthodox Congress or Orthodox theologian has ever declared that the Cross is our God or that the Cross represents our God? Or even more specifically, has any Christian Orthodox ever thought “This is my God” when standing either in front of the Cross or in front of an icon?

On the contrary, we venerate and honor the Cross not in isolation but in conjunction with Jesus Christ because the Wood of the Cross became holy the moment it came into contact with the Holy Body of the Lord. In the Synodicon of Orthodoxy which is recited on the Sunday of Orthodoxy we read: “We worship Christ on the one hand as our God and Master, and on the other hand we honor the saints, the icons, the cross and all the other consecrated symbols apportioning relative worship to them – relative and not absolute.”

But it still makes one wonder whether the Holy Scriptures do forbid us to bow before the holy objects indeed. Of course, this is not true. Actually, the book of “Genesis”, chapter 47, verse 31 informs us that Patriarch Jacobs bowed before Joseph’s cane: “And he said, Swear unto me. And he swore unto him. And Israel bowed himself upon the bed's head.” Does this mean that Jacob was an idolater? Of course not, his bow was a token of admiration and honor and not of worship.

In a nutshell, a symbol such as the Cross becomes idolatrous when we honor it in isolation from the source of the miraculous power, that is God, and when we believe that the symbol on its own has some sort of magical or miraculous power. Something like that happened with the bronze snake that Moses had made to save Israelites from snake bites, whenever they looked at it. So, King Hezekiah did not hesitate to smash the snake when he realized that the Israeli people took it as God due to its miraculous power.

In addition, the fact that in any era God is able to work wonders with material objects should not escape our notice. Like He did with Moses’ cane with which He opened the Red Sea and with a splinter of wood that prophet Elisaie (Elisha) dropped into Jordan River and made an iron axe float or with the bronze snake we have already mentioned. Also in The Acts of the Apostles, chapter 19, verses 11-13 we read that people were taking handkerchiefs or aprons from the neck and the waist of Apostle Paul and by using them they were able to heal their relatives from diseases and evil spirits.

Everything we have said so far works as an answer to all those who fight against the Cross and our Orthodox Faith. We have never feared them and we will not fear them now. As far as our Lord’s Cross is concerned we need to tell them that there is only one place It deserves to be kept. And this is in OUR HEARTS.