THE TEACHING OF ISLAM ABOUT THE ESCHATON (THE END TIMES) 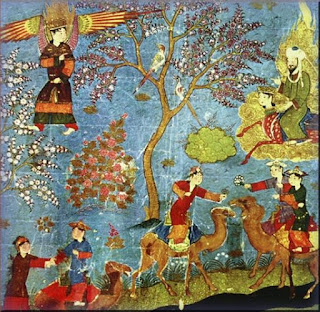 It is known - which is not denied even by them the Muslims - that the religious background of the teaching of Mohammedanism is purely Biblical that is Jewish - Christian.
Thus there could be an exception and the End Times teachings of Islam which is full of eschatological ideas from the biblical tradition...


But there is one differentiation. Because Muhammad did not used directly the authentic sources of Christian Faith but informed by oral traditions and even by heretical people, for this reason the eschatology of Mohammedanism is full of popular and eminently mythological perceptions.

SIMILARITIES AND DIFFERENCES WITH THE CHRISTIAN ESCHATOLOGY
According to the Qur'an, the death is not the end of life but the door leading to the afterlife and to immortality of the soul. God who is the Lord of life and death will resurrect the whole man to the final judgment.
For this reason the faithful while not discounting the goods of the present world shall strives for the permanent and eternal goods of Paradise. The golden rule for the proper preparation of man in this world formulated ​​by Al - Ghazzali  in the last book of his great work Ihya’ ‘ulum ad - Din  (The revival of the sciences of religion).
There certainly where Islam differs from Christianity is to the question why there is death. While in Christianity the death is due to the disobedience of Adam and Eve in the command of God, and is considered by the Christian theology as unnatural human condition, in Islam is considered as a natural ending because Adam and Eve were created by nature mortal. And hence the mortality of the forefathers of the human race passed in subsequent offspring.
Also while in Christianity the tragic of death remedied or blunted so to speak, from the salvific work and the Resurrection of Christ in Islam retains the death his terrible face and blunted only by the expectation of the future resurrection of the believer or the enjoyment of  Paradise’ delights.

THE TEACHING ABOUT INTERIM STATEMENT OF THE DEAD (barzakh)
The teaching on the intermediate state of the dead that is if the dead exist and in what condition posthumously known as barzakh (barrier) or qabr (tomb) was developed much later in Islam, and is full of many and varied folk superstitions and beliefs.
Was influenced by the perceptions of Semitic peoples of pre-Islamic Arabia, that the soul of the deceased travels in a shadow world, called sheol.
Thus in the beginning prevailed the opinion that the soul somehow remains undivided with the body in the grave. Thereafter, based on the teachings of the Qur'an that those who are killed for the faith live near of the Lord, was developed the teaching that the souls of the martyrs flying in the form of green birds in paradise awaiting the resurrection to be joined again with the body. This faith has purely pagan Arab origins, which speaks for the soul of killed, that transforms into an owl, wanting revenge and  has parsic origins (ancient religion of Iran) stating that the soul of the dead wanders for some time in the surroundings of tomb in the form of a dove. The belief - that the souls live after death - later became the official teaching of Islam and included all the dead and not only the martyrs. Nevertheless, in Islam there are two contradictory beliefs. The one accepts that the dead are in the monuments in a state of deep sleep expectant to sound the trumpet of resurrection and the most prevalent is that after death became a partial judgment from the terrible angels Munkar and Nakir and the true believers pre-savor delights of Paradise, and the unbelievers the sufferings of Hell. The belief concerning the two terrible angels is taken from the Jewish Tradition (Talmud), because the Quran says nothing about them.

WHAT KIND OF BODY WILL HAVE THE RESURRECTED
The teaching on what will arise after the Resurrection has deeply influenced from Christianity and the teaching on the intermediate state of the dead barzakh. So it is believed that the spiritual progress of the deceased does not stop, but continues after death in the grave.
And the earthly body can still be wearing out at the tomb but developed new one, which will therefore be elaborated on the day of Resurrection. Moreover, the Theologians of Islam conclude that, on this day will become a new creation not only of the body but also of the universe. And from the old bodies of the deceased will not have anything left except the full consciousness of individuality, and the new body to be completely different from earthly bodies.

THE MAHDI  OF ISLAM
Now, regarding the teaching of Mohammedanism for the signs that will herald the final crisis, we can say that it is full of biblical and Iranian influences. These depicted, with the most terrible and apocalyptic scenes. But there is also a novelty to them. And this is how the Muslims anticipate a legendary person with messianic qualities the Mahdi, who will bring justice to the earth and will disseminate Islam throughout the world. This doctrine of the Mahdi although it is not mentioned in the Quran, at times nourished political ambitions and justify disasters and crimes. But also he nurtured noble dreams for renewal of religion and liberation struggles. From the most known as Mahdi is the one of Jaunpur, who led eschatological movement in India in the late 15th century and Mahdi of Sudan, who is contestant for the freedom of his people, was defeated in 1885 by the British Lord Kitchener.

THE “ANTICHRIST” OF ISLAM
Islam is original literally in the teaching about “Antichrist”. Because Dajjal, the Muslim “Antichrist”, which will appear in the End Times and will sow terror and destruction on earth is an historical person (!) and stemmed from political controversy. Dajjal named the Abu Muhammed Sufyani, who belonged to the dynasty of Omegiadon, who then were leaders in the Arab world. When in 750 AD the Abbasid dynasty catalyzed that of Omegiadon the Sufyani he led of resistance in Syria, but was defeated and killed. After his death, his form was idealized and became the symbol of the resistance of Omegiadon.
Then the Abbasids unleashed slanderous propaganda against him, called him Dajjal and they identify him with the devil. Also they created and revelatory stories that in the Eschaton he will move with troops from Syria but he will be defeated on the way to Mecca.
At the time of the Crusades it were spread perceptions and teachings that will appear al-Mahdi and will kill the Dajjal under a tree out of Damascus.

THE EXPRESSIONS (MATERIAL AND CRASS) FOR THE PARADISE AND HELL
Although the teachings of Islam for the Paradise and Hell shows Christian influence, however lacking the spiritual sense that Christianity gives to them so the Hell and the Paradise for Islam has a purely material and thick character. The terrible descriptions of the sufferings of Hell and of endless delights of Paradise, leads the faithful Muslim to love God and keep his commandments for the fear of hell and the pleasures of Paradise, which is observed also in several believers of Christianity.
Muslim theologians and the commentators of the Quran, describes in detail the tortures of Hell and Heaven's goods, and are trying to locate the sites of Paradise or the various levels of Heaven and Hell.
They like to describe- probably because of the dry and inhospitable terrain of Arabia - the rivers and brooks of milk and honey that flows in Paradise or the abundant wine and fruits that will be available to every believer.
And they insist that this is all real and not symbolic, by far really from the goods of this world.
But from the educated Muslims, there was a movement - certainly under the influence of Christianity - to give spiritual character in the teaching of Hell and Heaven, which exerted a significant influence in Islam, although it was combated as disrespect from the official Islam.
There, of course, that the teaching about Heaven and Hell touching high spiritual realms is of the secrets of Islam who accept that the highest pleasure for the believer is the vision of God.