Translated from the originals by Chris Tsilikas 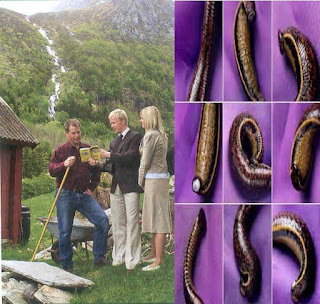 We will neither break fresh ground nor “carry coals to Newcastle” when we talk about the well-known persistence of Jehovah’s Witnesses in trapping innocent victims and trying to convert them to unpaid life-long salespeople of the issues of the American publishing company “The Watchtower”. And this persistence and importunity sometimes infringes on the limits of decency and touches the limits of paranoia to such a degree that they become real “leeches (1)”, which it is extremely difficult to get rid of...

And before any of our readers hastes to accuse us of slander, it would be worthwhile to read the following letter sent to us by our reader Dimitra, who had the bad luck to live in the same block of flats with a couple of Jehovah’s Witnesses.  We need to mention that she wrote to us to ask for advice, for ways or tricks in order to get rid of these irritating “leeches”. Anyway, we believe that Dimitra’s case is not the only one. Lots of our readers must have had similar or even worse stories to tell us. What we want to stress in the following letter apart from the importunity of Jehovah’s Witnesses is the disclosure of their hypocrisy and of their so-called social pretensions.

NOTE
[1] Leech: He sticks like a leech; we use this expression to describe one that adheres persistently to another. Literally, leeches are segmented worms; they are predominantly blood suckers that feed on blood from vertebrate and invertebrate animals. A leech attaches itself when it bites and it will stay attached until it becomes full, at which point it falls off to digest (Wikipedia).

Dear readers of these lines , the articles are ready , articles that will turn this team into a harmless , powerless group . Someone must eliminate on this team that's an espionage center against our nation . Their top leaders are professionals , agents who are no doubt on payroll of our enemies . Someone must repay them with the same coin , their payment's the total disaster of their group , but also the salvation of the persons that are trapped . I could not care less for the fate of their top leaders .

She wrote : They told me that they are against violence .