WORSHIP OF IMAGES – IS IT IDOLATRY OR NOT? 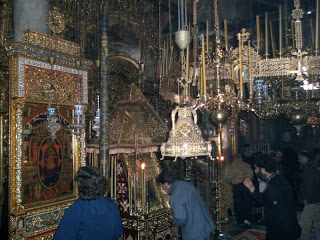 We were impelled to writing the following article by the fact that many faithful who happened to have a discussion with followers of several heresies (Jehovah’s Witnesses, Pentecosts, Evangelists, etc) approached us and asked for our help and for clarifications on whether the honors we pay to images, to holy relics, etc. is idolatry or not...

Before we start dealing with the question of whether we are idolaters or not, we think it’s wise first to look into the definition and the connotation of the word idolatry. So, according to the dictionaries, idolatry is the worship of an object – either real or fictional – as a god. This is also made clear in the Holy Scriptures. As it is described in one of its books, when Moses was away on mount Sinah, his brother Aaron took all the jewels from the Israeli people and made a golden calf. On the moment that he was delivering the calf to them listen to the words that they said as they were accepting that calf: “These be thy gods, O Israel, which brought thee up out of the land of Egypt!” (Exodus, chapter 32, verses 2-4) In other words the golden calf as a substance was God for the Israeli.

And I have to ask all the heretics now, When an Orthodox Christian stands in front of an image, has he/she ever said that this image is his/her God? Or has any Orthodox Congress declared anything like that? Do the heretics ignore or pretend to ignore that St. John Damascene, that great theologian of our religion, who sparkled during the period of Iconomachy declared his well-known to all Orthodox people position on the issue in his writing “About Icons”, that by honoring an icon or image you honor the person being illustrated on it and not the material from which the icon is made.

DOES GOD FORBID THE CONSTRUCTION OF IDOLS?

Yet, doesn’t God forbid the making of idols in the Ten Commandments? Of course He forbids it, but in the sense we said above, when this idol or image is worshiped as god. The fact that the making of idols and images has a relative meaning and not a literal one is also proved by the following facts. Wasn’t God Himself who ordered Moses to hammer two golden human-like cherubim on the cover of the Arc of the Testament? Exodus, chapter 25, verses 18-19. And yet again wasn’t God Himself who in the form of a cloud appraised the Temple of Solomon on the day it was inaugurated, a Temple which was full of representations of lions, oxen and cherubs? Kings 1, chapter 7, verse 29. But in the issue of the prohibition of making idols, images and representations we see that the heretics use their common tactic. We select what suits us from the Holy Scriptures and we deliberately ignore all the rest we don’t like.

We are astonished by the hatred Milennians and Jehovah’s Witnesses have against icons. They are the ones who shouldn’t say anything on that, because their publications support everything we have said so far. More specifically in their official issue “The watchtower” of November 1st, 1980, pp 28-29, there is an article entitled “Cherubs in Israel’s Worship—Why No Idolatry?” Referring to God’s prohibition of making idols and images they stress out the relativity of this prohibition by giving as an example the carvings in Solomon’s Temple.

«When this tabernacle was later replaced by Solomon’s temple, “all the walls of [the temple] round about he carved with engraved carvings of cherubs,” and “he made in the innermost room [the Most Holy] two cherubs of oil-tree wood, ten cubits being the height of each one.” Also, the doors of the temple and the sidewalls of the copper carriages for temple use were decorated with cherubs and other figures.—1 Ki. 6:29, 32, 23; 7:27-29.
Did the making of cherubs and other carved images for the temple not constitute idolatry? And in the subtitle that follows this question they explain when an image or carving is an idol and when it isn’t:
Not All Images Are Idols An idol is an image, a representation of anything or a symbol that is an object of devotion, whether material or imagined. Idolatry with the use of images and symbols is widespread».

And it ends up stating that God’s law did not rule out the making of representations and statues.

«However, God’s law not to form images did not rule out the making of all representations and statues. As noted above, figures of cherubs were used to decorate the tabernacle in the wilderness and Solomon’s temple in Jerusalem».

Then what does their hatred against icons stem from? It stems from the fact that in their most part Jehovah’s Witnesses are not educated people at all and do not have any proficiency either in writing or in reading; therefore, they don’t have the possibility to read the publications of the Society thoroughly. When one first joins the Society learns a chapter by heart, which chapter is against representation and then he keeps on repeating this chapter for the rest of his life.

HAS ANYBODY SEEN GOD?

Let us deal now with another argument that heretics use as far as the representations are concerned. They wonder how we Orthodox people draw representations of God since as John the Evangelist says in his Gospel, chapter 1, verse 18 “No man hath seen God at any time” Well, once again we have the deliberate distortion of the truth, the well-known tactic of the heretics, because verse 18 does not stop there but it continues: “the only begotten Son, which is in the bosom of the Father, he hath declared him”. This verse talks about the Devine nature of the Devine Father, which is sensibly invisible and inaccessible to humans. That’s why it is Christ – who is God Himself – the one who declares it to us. Now, God has certainly been seen by humans (not in His Devine nature, of course) and these sightings are quite a few throughout the pages of the Holy Scriptures. We have just selected two of them, the two we consider to be the most representative. The first is in the book of Isaiah, chapter 6, verse 1: “In the year that king Uzziah died I saw also the Lord sitting upon a throne, high and lifted up”. And verse 5 in the same chapter is amazing for its clarity: “...for mine eyes have seen the King, the LORD of hosts”. And in the book of prophet Daniel in chapter 7, verse 13 we read: “I saw in the night visions, and, behold, one like the Son of man came with the clouds of heaven, and came to the Ancient of days”. Here Daniel sees both the Father and the Son. On the other hand in several pages of the Holy Scriptures there is the thought hovering in the air that the one who sees God dies. For example, in the book of Judges, chapter 13 Samson’s parents accommodate God – who has the form of an angel – without having realized it. And listen to the words of Samson’s father, in verse 22 of chapter 13, when he realizes that he had actually accommodated God: “We shall surely die, because we have seen God”. So dear heretics hasn’t anybody seen God? Maybe you should start wondering whether you’re all at sea!!!

To sum up we need to remind to all of you that anyone who rejects the representation of Jesus Christ, he/she’s actually rejecting His incarnation, since he/she only accepts His divine nature and not His human one.

Coming now to the way we honor the relics of several saints we would like to note that many times we, Orthodox Christians, have become the target of multiple comments – ironic comments indeed – for this faith. Where is our faith and honor to holy relics based? Before we answer this question we would like to point out that our faith to holy relics is one of the most magnificent, beautiful and hopeful faiths we have. It’s actually a message of immortality, a message against waste and death. We believe that the ‘glorious’ person, meaning the person who has God’s glory, keeps on having this glory even after his death, that’s why this glory becomes visible in or through his holy relics with various actions, such as the emission of beautiful fragrances from them, the appearance of miraculous activities, usually healing ones, etc. “That’s nice” a heretic would say “but who can assure me that all these are not priests’ tricks to make money by taking advantage of the naivity of the faithful people? Do you want to make us believe those tales? Is it possible for bones to heal?” Yet, yes my dear Christians, whatever the heretics say, do not lose your courage. Our faith is based on such solid foundations that, as Christ said, not even the gates of Ades could beat it. Because the holy relics can do wonders indeed and even reincarnate dead people! And these words do not come out of a delirious school teacher of religious education but out of the Holy Scriptures. We’ll let the Holy Scriptures answer to the ironic judges. The extract we will use is from the book of Kings 2 and describes a miraculous incident which occurred with the bones of Prophet Elisha, a disciple of Prophet Elias: “And Elisha died, and they buried him. And the bands of the Moabites invaded the land at the coming in of the year. And it came to pass, as they were burying a man, that, behold, they spied a band of men ; and they cast the man into the sepulchre of Elisha: and when the man was let down, and touched the bones of Elisha, he REVIVED, AND STOOD UP ON HIS FEET”. 1 Kings, chapter 13, verses 20-21.