What they were thinking about the stars and demons, in the years of Jesus 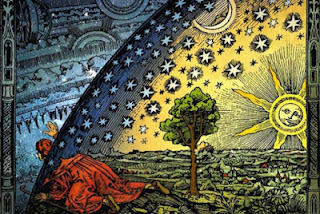 Several times the Gospel recounts us Jesus to heal people who were under the possession of evil spirits. Christ imparted this privilege and this ability to his disciples when he sent them two by two to preach. Of course, apart from the daemonical there were and others with various mental illnesses, but that was something foreign to the Jews and also to all ancient peoples. For this reason, moreover, they believed that they too belonged to the category of those who were possessed by evil spirits...

It is noteworthy that in the wicked spirits, not only believed the great mass of uneducated people but also and the cultured people, that is why the Talmud - i.e. the exo-biblical tradition - gives many instructions for dealing with them. Thus, by way of exception, at Saturday, even though was prohibited, was allowing them to light up a lamp to be able to expel a demon or possibly run a greater distance in order to avoid it. Even they believed that many sins - so clearly - were a work of the Evil one, as to be considered irresponsible the person who is committing these.

Whence the demons derived? They had two perceptions (a) from the fallen angels, who with their leader Lucifer rebelled against God, (b) the children that Adam did before obtaining - at the age of one hundred and thirty years - his son of Seth, which was " similar to him "Genesis 5: 3. Usually the wicked spirits are invisible. But if someone was putting sifted ash in front of his doorstep, could in the morning to see his traces, which they looked like the imprint of the rooster legs.

The presence of demonic spirits is everywhere and especially in ruined buildings, in swamps, in the shade of some trees, but also in the ... lavatories! Indeed, was circulating a story about a rabbi, who in order to protect from the demons, in this place, was taking with him a lamb! The demons affect animals and humans, but particularly those with severe disabilities, the betrothed women and the bridesmaids. Woe to the man who was sleeping alone in a house. There was a high probability of becoming a victim of Lilith and God only knows what terrible things will happen to him!

Lilith (Hebrew lilatou, which means night) was a female nocturnal demon. Is depicted as a naked woman whose lower part of the body is the body of a reptile. It is an enemy of new mothers (have recently given birth) and of newborns. According to Jewish tradition, she was the first wife of Adam, whom he abandoned to become a demon. The later Jewish traditions describe the Lilin (plural of Lilith) as the demons of the night, similar to the Ghoul and Vixen.

But how could someone be protected by the demons? Naturally following faithfully all religious instructions. Then, God gives him guardian angels, who are struggling against the demons, exterminating thousands of them. But the guardian angels should be helped in their struggle. This is mainly achieved by prayer. The Talmud says: "Whoever recites the «Shema Israel (i.e. Listen Israel)»- something similar to our own «I Believe» or  «Lord's Prayer» - before falling to sleep, it's like to hold in hand a double-edged sword against the night demons". It recommends still to wear  the "tefilim" (Jewish amulets with verses from the Bible), on the arm or in the forehead, while they are praying, if they feel that some evil spirit walketh them. Moreover, it is good, the "tefilim" to contain the fifth verse of the 91st Psalm, which is what you need for the specific case: "Thou shalt not be afraid of fear by night, on the day by flying arrow".

But even the most pious Jews were not limited to these "legitimate" ways to prevent from evil spirits and to be protected against these. Usually, in secret, were wearing amulets, a tradition that is observed almost in all people (ancient or younger). This custom must - probably - to had become an institution since the “textbook of Saturday" feels the need to clarify that one could come out – in the holy this day for the Jews - with an egg of locusts, with a fox tooth or a nail from gallows! In excavations that were done, have been found several small objects and is believed that it was definitely amulets: pierced shells, teeth from various animals, small bones, crescents and discs adorned with a star.

It is also believed that many Jews, despite the ban by the Mosaic Law for each animal imaging, they donned amulets from small metal snakes, golden flies, hippos from paisley which were in common use among the pagans of Phoenicia and Egypt. Even during the war of the Maccabees, several of these pagan symbols were found in corpses of Jewish soldiers.

Reading the Talmud we find that the superstition was evident in Jewish daily life, which should not cause impression to us, after the Jewish people was strongly imbued with religion, so that for  religiously ignorant and humble people, the faith easily was turning into fetishistic devotion and in an establishment of a taboo. Thus, they considered the even numbers as misfortune. When two people were eating together and one of them was dropping small balls of bread to the other, were absolutely certain that would becoming ill. If at the same time they were putting their hand on the platter, he caught the evil eye. If they were coming out with a horse or donkey, without hanging a tail of fox or a red rag, between the eyes, they were in danger of falling from it. The faith also was diffuse that there were people with "evil eye", whose the presence only was enough to bring misfortune. Someone rabbi, reaching to exaggeration, argued that in a hundred dead, the ninety-nine were dying from this bad cause! For their defense against the "evil eye", except for the use of amulets, they were used some words that they believed that exorcises evil.

So natural and expected was that all this were leading to the practice of magic, anything that was prohibited with passion from the Bible. In Deuteronomy, one of the books of the Bible, there is an analytic list of activities that are prohibited: «You will not find anyone among you who can offer his son or his daughter to be burned as a sacrifice, or to perform divination or an augur or arcane arts or magic˙ nobody should not become a magician or exorcist of spirits, prognosticator or necromancer. Anyone who does this is hateful to the Lord» Deuteronomy 18:10 - 12. In the above list, someone rabbi he added the snake charmer and the ventriloquist.

However the Jews were keeping well all these prohibitions? Apparently not, as the Talmud promises that «those who have never indulged in divination would have a place in the sky, in a place that even the angels can not go». Particularly, the Jews condemned astrology. The "Book of Jubilee", the famous Jewish apocryphal and one of the most favorite readings of that time, written about 150 BC, attests that the evil angels taught astrology in humans and in an additional apocryphal the "Sibylline Books" called it "pernicious science which begets all bad". However, in their daily lives and behavior the Jews were taking into consideration the divination and astrology, especially to the election of the name of their children. There were rabbis who were accepting astrology saying that «ο πλανήτης κάτω από τον οποίον γεννιέται καθένας καθορίζει τη σοφία και τα πλούτη». But most rabbis emphasized that all this is naivety arguing that "the stars do not have any effect on the destiny of the Israelites".

However, it is worth noting, that the Jews, in relation with the Romans and other pagan peoples of their time, they did not give great importance to divination and astrology, as these.

1. Daniel Rops : “Daily life in Palestine, in the years of Jesus”.