CREATION OF THE WORLD AND HUMAN IN AFRICAN RELIGIONS 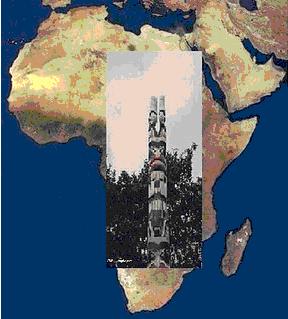 In recent years, our country was meant to be swamped by thousands of immigrants, who are expecting a better life settled in it, not only were our neighbors but some of them and relatives by marriage...


For this reason we have start a long been in the pages of "Antiairetikos" some articles related to religiosity, so that the reader has some perception - even minimal - for some behaviors that may seem incomprehensible to, because the correct and responsible information helps in good proximity to the removal of misunderstandings that might be created due to different religious and culture.
So many immigrants originate from Africa, the "black continent". So in today's article we will deal with cosmology and anthropology of religions in Africa. A continent in which they live hundreds tribes and peoples who should be noted are distinguished for their intense religiosity.
MYTHS FOR THE CREATION OF THE WORLD
For the avoidance of misunderstanding and confusion must first be emphasized that the term African Religions are meant religious formations are developed sub-Saharan and certainly not in North Africa (Egypt, Libya, etc.), i.e. the countries that are wetted from the Mediterranean Sea.
The main characteristic of all African Religions is that due to lack of writing everything related to the religiosity of African faithful, has survived to us today through various religious traditions or customs, but mainly by myths.
The African myths then referred to the creation of the world as a rule is very thrifty, but also the most imaginative in the world. It refers to the creation of the world by the creator God, but not in the sense that we know as Christians, i.e. from scratch. The African myths approach to the myths of the ancient Greeks and other Mediterranean peoples, namely 'shaping' of pre-existing materials such as water, mess, monster, egg, etc.
But there are tribes such as the Kono in the Guinean believe that the primary force in the world is death, even before of this God. The shepherds Mali Fulani have as the core of his cosmology the sacred milk. Of the strangest myths of cosmology is that of the Fang or Pangkoua in Tanzania. They believe that the world was created by the feces of ants! Similar and the Voschimanoi accept the creation of the moon from an old shoe!  The known to us Pygmies - famous for their small height - believe that his God called Chonvoum communicates with people through real animals or through imaginary as the elephant Gore that produces the thunder!
The Boukousou of Western Kenya narrate how the supreme God Uélé Chakampa created the universe in two days. And not having house until then created the heaven to resides and all the rest that situated in the world. Also the Boukousou believe - reminding the Galatians of comics Asterix and Obelix - that to avoid falling sky, the supreme God Uélé Chakampa supported him with pillars. Then, probably because he was tired, he created and two assistants the Mouchove and Mouroumoua. Continuing this creation made ​​the sun and the moon. Strange is the narration - for our current perception always - regarding some natural phenomena. For example they believe that the lightning and the thunder caused by one cock and there are two rainbows, one female and one male! Differentiated but yet eloquent is the faith of Boukousou and in other things of the world. They accept that first created the man (Muamba) and the woman (Sela) and then the lakes and the seas, because the first human pair need water that fell from the sky. So when were formed the lakes and the seas, natural next was to create from the ultimate God Uélé Chakampa the plants and the animals.
There are tribes in Africa where the myth of the creation of the world is more complex. The most thorough is the myth of the Dogon, who for reciting the whole needed 7 days.
In African societies with polytheistic form, there is the belief that God after creating did assigned certain responsibilities in spirit deities of limited scope, through which sustains the world and cares for him.

MYTHS FOR THE CREATION OF HUMAN
The fact is though, that the main interest of African religions are not as cosmology as long as anthropology and the survival of man. Thus, in the creation of man and at the start of the race reported several myths, which connect most of the time with the highest God.
The Dogon for example narrate how the creator deity creates an egg first. In egg there are two pairs of twins, each consisting of one male and one female. These twins were supposed to mature into egg and become hermaphroditic beings, the perfect creatures that inhabit the world.
The Yoruba of Nigeria speak of a creator god who got drunk with palm tree wine and created the albino and the cripples.
However common belief in almost all African religions is that man was invited to live in an idyllic world, in a paradise.
But the African resident watching the world found the existence of bad and death. So, wanting to give some explanation to those, he created myths who tell how the bad and the death went in the world and in human life. It is a common line of all African myths that man is culpable for the existence of evil in the world and certainly not God.
So, continuing the Dogon myth recounts that one of the twins of the cosmic egg, to mature before - i.e. before it reaches in perfection - leaves the egg and taking with him a part of the egg creates an imperfect world. The creator deity watching this fraudulent act, sacrifice the other pair of twins to achieve balance in the world. With this sacrifice saved the world while but is now incomplete because inside dominates the bad and death.
Disappointed God retired by humans and no longer has the close relationship and contact that was primarily with him. So, vividly narrates one African myth of removal of God: “Heaven where God reside, was once much closer than it is today. So close was that people could touch him. But one day some women took pieces from heaven to cook them the soup. Then God was angry and was removed to its present distance.”