JEHOVAH’S WITNESSES: ‘NAUGHTY GUYS!’ WATCH OUT! THE BIG SISTER (THE WATCHTOWER) IS WATCHING OVER YOU! 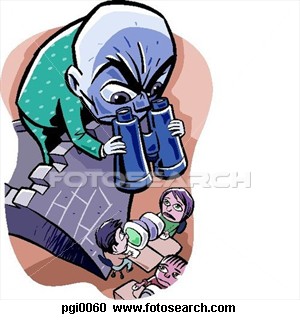 INTERFERENCE OF THE WATCHTOWER WITH THE PRIVATE LIVES OF ITS FOLLOWERS

As it is well-known, it is a rule that when dark, secretive societies or dictatorships want to achieve their goal and keep their power, they use far-fetched illegal methods. Such methods may include mechanisms of terrorism and spying, violation of private life and of individual scope and generally mechanisms that deplete human value as well as internationally accepted and identified individual rights...

Unfortunately, the Society of Jehovah’s Witnesses, “The watchtower”, is not exempted from this rule. With a view to achieving its goal, as a new coming Orwell-like ‘Big Brother’, it does not hesitate to resort to spying and prying even on the most private moments of the individual life of its followers. And when we say private moments we certainly mean sexual intercourse! Although it sounds extraordinary and hard to believe, “The Watchtower” wishes to keep track of the sexual stances!! its followers take! And even more “The Watchtower” declares whether it approves of them or not!

On the other hand, it’s really sad on the part of its followers, because we realise that once they join the Society they lose their dignity, their critical thought and ethics, and just expect guidance from the Society as to what is ethical and what is not during their intercourse with the people they mostly love; instead of taking their own decisions on sexual ethics based on the norm of showing respect and of avoiding the humiliation of their lover who is in resemblance to God.

THE PROBLEM OF “SEXUAL DIVERSITY” IN ‘THE HEAVEN’ OF THE WATCHTOWER

It is certainly not the responsibility of elders or any others in a Christian congregation to search into the private lives of married couples. Nevertheless, if future cases of gross unnatural conduct, such as the practice of oral or anal copulation, are brought to their attention, the elders should act to try to correct the situation before further harm results, as they would do with any other serious wrong. Their concern is, of course, to try to help those who go astray and are ‘caught in the snare of the Devil.’ (2 Tim. 2:26) But if persons willfully show disrespect for Jehovah God’s marital arrangements, then it becomes necessary to remove them from the congregation as dangerous “leaven” that could contaminate others.—1 Cor. 5:6, 11-13.

However, how is it possible for “The Watchtower” to find out what happens in the couple’s bedroom? Unfortunately, Jehovah’s Witnesses have sunk so low! The ‘brainstorming’ they have been submitted to is so much that the spouses peach against each other!!! And their ‘sinking’ has no ending since young spouses are literally humiliated when they are brought before the elders who constitute the judicial committee (yes that’s right, there are courts in the Society which deal with various offences of ethical purity and ethical preaching) to give a detailed description of what is happening in their marital bedroom.

Marriages have entered times of turbulence and couples have been in danger of breaking up their marriage when one of the spouses isn’t a Jehovah’s Witness and regards all these – as they are indeed – as objectionable and as vulgar interference with personal life and especially with private affectionate loving moments.

However, despite the spying of “The Watchtower” and the indiscreet intervention in the bedrooms of its followers, sodomy and sexual abnormality of any kind is flourishing in the ‘Paradise’ of the Society, since the elders are the ones who urged married Jehovah’s Witnesses couples to take to such abnormal ‘sports’. Therefore, the Society was compelled to send a letter, by the code name W, to the congregation of Jehovah’s Witnesses in California, U.S.A., to ‘reprimand’ those elders who had advised married couples that oral sex is not immoral: 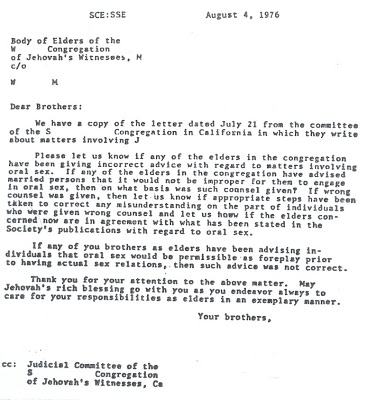 This document is from the book “A Crisis of Conscience” by Raymond Franz, p 45, English edition. R. Franz has been able to have hold of the above document, since he used to be a member of the Governing Body of Jehovah’s Witnesses, that is, of those who were in Brooklyn – the headquarters of the Society of the Watchtower – and govern Jehovah’s Witnesses all over the world.

AND THE ‘SEXUAL DIVERSITY’ OF JEHOVAH’S WITNESSES IS GOING STRONG
It’s worth pointing out how accommodating the conscience of the Society is as far as ethics is concerned and how easily it manipulates ethics on condition. In the letter they sent to the W congregation in California, they do not reprimand – as one would have expected – the offenders who had been having oral sex, but they turn against the body of elders who dared to pass their own beliefs and not those of the Society.

Coming now to the end of this interesting – as we see it – issue we would like to mention that in spite of the willing or unwilling efforts of “The Watchtower”, a lot of its followers still take to sexual abnormality, a fact that urges the Society to recur to this issue in its publications quite often. Out of the abundance of incidents of sexual misconduct we have ‘fished’ in the publications of the Society, we quote the most recent, so that it could also function as proof for those Jehovah’s Witnesses who will argue that all these used to happen in the past and it is not an issue any more as today there is no such sexual misconduct and everything in the Society is pure and holy. The extract below is from “The Watchtower” of April 1st, 1999, p 31, and it refers to Jehovah’s Witnesses, both male and female, who follow the disgusting Canaanite practices.

Holding Fast to Our Integrity
No doubt about it, today a battle is being waged for the heart. Will we stay loyal to Jehovah or become sidetracked by the loose living of this world? Sad to say, just as the Israelites gravitated to disgusting Canaanite practices, some Christian men and women today have been enticed to commit shameful acts.—Compare Proverbs 7:7, 21-23.

Canaanites were a Semitic race from Canaan, the fourth son of Ham (son of Noah) who lived in Palestine. Apart from anything else their name denotes sexual perversions, such as sodomy, bestiality, homosexuality and especially incestuousness (in other words having intercourse with family members). The Prophets of Israel turn furiously against them and warn Israelites not to follow their perverted practices because they will be faced with God’s Wrath.

An ex Jehova witness gave an interview to a journalist , in which said : The top leaders that rule this team , installed an enormous mechanicm in the basement , in the kingdom hall , kifisias avenue , number 77 , so they can watch everything the Jehova witnesses do or discuss among them , even when they are at their homes .