JEHOVAH: AN ARTIFICIAL NAME FOR GOD 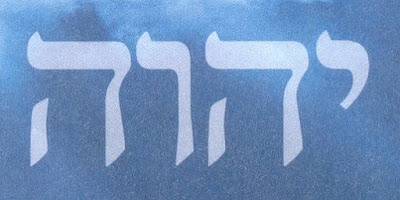 
In order to be more comprehensible we’ll give an example so as to elucidate what we mean when we say that we put limits by naming something. For instance, we’ll take the word ‘table’. When we describe something as a ‘table’, we determine its attributes and exclude all other attributes that may or could be attached to it. Therefore we enclose its meaning within very narrow limits so as to avoid meaninglessness while communicating.
When it comes to God though, we cannot do the same because, as stated above, if God is narrowly determined he stops being God. And to prove what we have been saying so far, we’ll refer you to the Holy Bible – the most reliable source with regard to religious matters – where there is a profusion of ‘names’ used for God, names which are used selectively to describe a different attribute of God every time. So:
1.   I AM THAT I AM (‘Hayah’, in Hebrew). Exodus, 3:13-14
2.    For thou shalt worship no other god: for the LORD, whose name is Jealous (‘Kanah’, in Hebrew). Exodus, 34:14
3.    For thus saith the high and lofty One that inhabiteth eternity, whose name is Holy (‘Kados’, in Hebrew). Isaiah, 57:15
4.   Doubtless thou art our father, though Abraham be ignorant of us, and Israel acknowledge us not: thou, O LORD, art our father, our redeemer (‘Goel’, in Hebrew). Isaiah, 63:16

So, the Organization of Jehovah’s Witnesses ‘Watchtower’ is totally wrong to claim that God has only one name and this is Jehovah. And they are even more wrong in their claim that God should have a name to be distinguished by other gods. Since, no other gods exist, ‘non gods’, as Apostle Paul says in the Acts of the Apostles.
HOW HAS THE ARTIFICIAL NAME JEHOVAH BEEN FORMED
It’s time now to explain why we believe that the name ‘Jehovah’ attributed to God is an ARTIFICIAL name. Let’s take it from the beginning so that we are clear in our claims. The words in the Hebrew language were written without the use of any vowels. If we applied the same technique in the English language, for example, we would write the word ‘father’ only with consonants, as follows: ‘fthr’. The vowels would be omitted because they would be easily understood as they would derive from the combination of the consonants being written. Exactly the same happened with a Hebrew word referring to the name of God, which had four consonants, YHWH, often described today as the Tetragrammaton (the word derives from the Greek language and means the four letters).
Unfortunately, due to the Jews’ superstitions and their strict tradition which impelled the need to follow the Mosaic Laws strictly by the book, which said that God’s name should not be pronounced, they did not pronounce God’s name and they referred to Him by the Tetragrammaton YHWH. So, as time went by, the pronunciation of the Tetragrammaton was completely forgotten.
Between the 6th and the 10th centuries AC., Hebrew traditionalist scholars decided to insert vowels in the ancient Hebrew text of the Old Testament, since as we said it only included consonants. These scholars were called Masoretes and to their honour the new text that came about was called Masoretic. The Masoretes had no difficulty inserting vowels to all the words of the ancient Hebrew language, because they were aware of the pronunciation of all the words except for one, the Tetragrammaton YHWH.
To overcome this problem they did something else. They took the vowels from another word which was used for God, the word ‘Adonai’, and inserted them to the Tetragrammaton YHWH. Then applying different linguistic and phonetic rules of the Hebrew language, they formed the word ‘Yahweh’ or ‘Jehovah’. In other words, this name does not exist anywhere in the Old Testament, because it’s a Masoretic formulation of the 10th century. From this century on this name is used abusively and for reasons of communication, and it has even been used by Christian writers and theologists, such as Saint Nectarios of Aegina, without been given any significant attendance or meaning, because as we have already said it didn’t deserve it.
And to prove the truth of what we have been saying so far about ‘Jehovah’ being an artificial name we refer the reader to the Encyclopedia Papyrus-Larus-Britannica, volume 17, page 264 (Greek edition). We have selected this citation for two reasons. Not only is Papyrus-Larus-Britannica well-known for its validity all over the world, but it’s also quoted quite often by the Organization of Jehovah’s Witnesses ‘Watchtower’; therefore its validity for the ‘Watchtower’ is beyond doubt. For instance, quotations from the specific encyclopedia are used in ‘The Watchtower’ of 15th of May 1997, page 3 and in ‘The Watchtower’ of 1st of May 1999, page 15, etc.
Well, the encyclopedia Papyrus-Larus-Britannica writes about the name Jehovah in volume 17, page 264 (Greek edition):

“The Masoretes, who, from the 6th to around the 10th centuries, worked on deciphering the ancient text of the Hebrew Bible, replaced the vowels of the name YHWH with the vowels of the Hebrew words Adonai or Elonai. This is how the artificial name Jehovah (Yehowah) was brought into existence.”
‘Papyrus-Larus-Britannica’ (Greek edition)

Even the Organization of Jehovah’s Witnesses ‘Watchtower’ agrees with everything we have said about how the name of Jehovah was brought into existence. And we say this because in their magazine ‘The watchtower’ of the year 1960, p. 455, the Organization itself analyses thoroughly and succinctly everything already said about the name of God Jehovah. That is, they explain how the Masoretes took the vowels from the word Adonai and put them in between the consonants of the Tetragrammaton YHWH in order to form “Jehovah” as God’s name. Moreover, a further down on the same pages, p. 455, the Organization ‘The Watchtower’ writes something that leaves no doubt about the origin of the name ‘Jehovah’. More specifically, the Organization claims that they use the name Jehovah in their publications, not because it’s right, but because humans have got used to it since the 14th century:

*** w60 8/1 p. 455 Not Forgetting the Name of God ***
Notwithstanding, it is almost certain that the name of God was originally pronounced “Yah·weh′.” (In “Jehovah” the sound of “Y” is represented by “J” and the sound of “W” by “V,” as in Latin.) The Encyclopædia Britannica says: “It is now generally agreed that Jahwe (Yahwe) is the true pronunciation.” The Universal Jewish Encyclopedia states: “Yahveh is the most probable transliteration of the ancient Hebrew name for God.” Bible translator J. B. Rotherham said: “The true pronunciation seems to have been Yahwe.” The Catholic Encyclopedia declares: “Jehovah, the proper name of God in the Old Testament. . . . Inserting the vowels of Jabe [the Samaritan pronunciation] into the original Hebrew consonant text, we obtain the form Jahveh (Yahweh), which has been generally accepted by modern scholars as the true pronunciation of the Divine name.” The New World Bible Translation Committee stated: “While inclining to view the pronunciation ‘Yah·weh′” as the more correct way, we have retained the form ‘Jehovah’ because of people’s familiarity with it since the 14th century. Moreover, it preserves, equally with other forms, the four letters of the tetragrammaton JHVH.”

WHY HAVE JEHOVAH’S WITNESSES BEEN CALLED SO?
And now let’s explain the reasons why ‘Jehovah’s Witnesses’ have been called so. Up to 1931 they were known as the ‘Bible Student Movement’ or ‘Russelites’ (called after their founder Charles Taze Russell). How, then, did they come to the adoption of their current name? The facts that led to that adoption are as follows:
Before 1925 the President of the Company at that moment, Joseph Franklin Rutherford, edits and issues a book entitled “Millions now living will never die”. In that book Rutherford establishes the year 1925 as the year of the resurrection of the ancient Patriarchs (Abraham, Isaac, Noah, etc.) and the year of the end of the world.      But as the year 1925 passed by and none of the above happened, a quite great number of  their followers – Jehovah’s Witnesses did not exceed 56,000 then, anyway – rebels and departs from the movement. In order to avoid the confusion that followed since both movements used the same name, Rutherford thought something evil.
He decided to change his movement’s name making it thus, clear that they are not connected in any way to the movement of the rebels and, in addition, taking the stigma of the wrong prediction off the back of his movement. Thus, in September, 1931, during a conference in Columbus, Ohio, after his suggestion, the new name of Jehovah’s Witnesses is adopted. And since then crowds of Jehovah’s Witnesses have been scouring the world to convince people of the necessity of an artificial name for God for their own salvation. But, as the murderer always hits twice, the organization of Jehovah’s Witnesses comes back to the specific name quite often in their publications because they understand how wrong they are. From the numerous references to the specific issue that we have encountered in their publications, we will cite an extract from an article which appeared in the official issue of their magazine “The Watchtower” on 1st February 1999, p. 31, entitled ‘Jehovah or Yahweh’. Having discussed the views of different scientists on the issue of the two names, the Organization concludes: “So there isn’t any doubtless way to prove which vowels were inserted in the consonants YHWH”:

*** w99 2/1 p. 31 “Jehovah” or “Yahweh”? ***
No doubt the scholarly debate will continue. Jews stopped pronouncing the name of the true God before the Masoretes developed the system of vowel pointing. Thus, there is no definitive way to prove which vowels accompanied the consonants YHWH (יהוה). Yet, the very names of Biblical figures—the correct pronunciation of which was never lost—provide a tangible clue to the ancient pronunciation of God’s name. On this account, at least some scholars agree that the pronunciation “Jehovah” is not so “monstrous” after all.

“The Watchtower” on 1st February 1999, p. 31: So there is no doubtless way to prove which vowels were inserted in the consonants “YHWH”

However, both the Organization and its followers insist on persuading us how significant the name is for our own salvation, a name that we don’t even know how it used to be pronounced! The intellectual blindness the Holy Writ talks about is apparent in actions like this.
Αναρτήθηκε από ΧΡΗΣΤΟΣ στις 9:30 μ.μ.