Ex - Jehovah's Witnesses, who are now members of the Catholic Church, share their personal stories


Translated from original by Alexia Kriniti 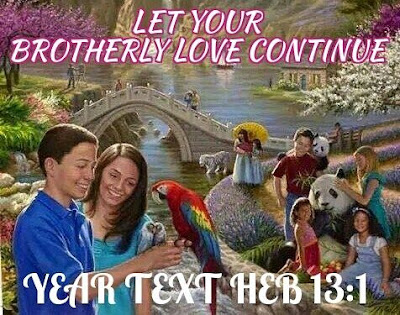 For the readers to better understand the following testimonies of former Jehovah's Witnesses, first it is necessary to realise that the members of this sect live an essentially different life from the rest of us and not in a positive way, as Jehovah's Witnesses like to believe. The lives of Jehovah's Witnesses, religious and spiritual, professional, personal and social, are completely identified with their heretical religion...

4. It refers to Nadab and Abihu, sons of Aaron, who were punished by God because they offered "strange fire" at the altar of the Lord in Sinai (Numbers 3,4 and 26.61). Their story is often used by the Watchtower, to terrorize Jehovah’s Witnesses about the punishment that awaits them if they attend a wedding or funeral of other religion!
5. I could not answer to her question because I do not know Greek Jehovah’s Witnesses. However, I suppose that they are not allowed to visit religious monuments, like Kapnikarea Byzantine Church.
6. “A double life”: The Watchtower and the Jehovah’s Witnesses use this phrase to describe the lifestyle of many Jehovah’s Witnesses teenagers who live a life according to the Organisation’s teachings and their parents’ expectations at home and at Kingdom’s Halls and they live a totally “worldly”way of life at school (they smoke, they drink alcohol, they date non-Jehovah’s Witnesses, etc.). The phrase also refers to teenagers who have already decided to walk away from the Watchtower, but who do not experience their life in an extreme way (just like Sebastian). Double life seems to be a serious problem for the Jehovah’s Witnesses, because the Watchtower often refers to it in is editions; for example: A Double Life—Who Has to Know? “Young People Ask”, Volume 2, p. 136-137.
7. The Kingdom Songs, the religious songs Jehovah’s Witnesses use in their worship, is nearly the only music they listen to. For example, Sebastian’s parents listen to them even when they drive, something very usual for Jehovah’s Witnesses.
8. It was the first time I heard that story and temptation made me question it. It is so unbelievable, but it is true and I own Sebastian an apology for my doubts. The Watchtower (Study Edition,) 15/4/2007, p. 30: “Questions From Readers: Should a Christian avoid beverages and foods that contain caffeine?Let us first consider why some people avoid beverages and foods that contain caffeine.One major reason is that caffeine might be considered to be a mood-altering drug, having a stimulating effect on the mind. It can also be addictive…”
9. Sebastian is referring to the British actor Mr. Luke Evans, Jehovah’s Witnesses’ son, who left the small Welsh village, where he lived, at the age of 16. He went to London to pursue a career as an actor and to walk away from the Watchtower. He has never been baptized and he does not speak negatively of his parents’ religion in his interviews. For example, he has said that his parents were very poor but there was love and happiness in his home, thanks to his parents’ religion. Former Jehovah’s Witnesses in their forums interpret this actor's attitude as a kind of compromise, so the Watchtower will not prohibit his family from having relations with him.
10. 1914: The most important doctrine of the Watchtower, the cornerstone of the Organisation’s teachings and beliefs. The invisible Second Coming of Christ supposedly took place in 1914 and Jehovah appointed the Watchtower as His channel on earth. The Watchtower must protect the 1914 doctrine at any cost, therefore it teaches that Babylonians conquered Jerusalem in 607 B.C. and not in 587 B.C. as History and Archaeology and even the Bible have proved. Before the Internet, the Organisation did not give any further explanations about 1914 and if a JW asked about it, the reply was “these are apostates lies”. However, the Internet has caused many problems to the Jehovah’s Witnesses’ leadership, so there are articles in the Watchtower literature trying to explain to theJehovah’s Witnesses why the 607 B.C. is the correct date for the destruction of ancient Jerusalem, e.g.“When Was Ancient Jerusalem Destroyed?” 1/11/2011, p. 26
11. This is how the Watchtower describes any site, magazine, book, etc. exposes its lies, false doctrines and false prophecies. It intimidates its followers not to read such sources or they are taking Satan’s side.
12. In the French language, Alexandre paraphrased Jesus Christ’s words: “…so that where I am you also may be” (John 14:3).
13. “Paris Nord Villepinte”: large convention center located in Villepinte, near Paris Charles de Gales Airport, where Jehovah’s Witnesses attend their annual regional conventions. Alexandre was waiting for the Annual Regional Convention, an important event for the Jehovah’s Witnesses, before announcing to his family his decision.
14. Another way of control and fear: Watchtower teaches its followers that if they walk away from the Organisation, God will not resurrect them.
15. It is the official policy of the Watchtower to slanderthose who are leaving the Organisation by spreading lies and gossip about them.
16. He is referring to the deadly terrorist attacks in Paris on 13 November 2015.