THE INCURABLE “LOVE” OF A JEHOVA’S WITNESS FOR ORTHODOXY 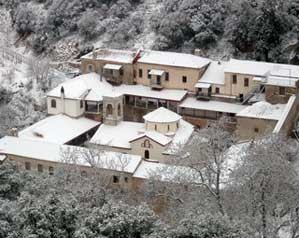 The monastery of Agia Lavra

When I was 17 we immigrated to the USA. But my parents didn’t live there for long; they moved back to Greece 3 years later, leaving me alone there. After a while I got married to a girl who was a Jehovah’s Witness as well. Nevertheless, the gap and the doubt still remained and I couldn’t explain it. They told me that I had to study more and progress in the Society so that my faith could be stronger. I did it all, I studied day and night...

In a while I started getting various ranks in the Society, and so I became “a ministerial servant” and soon after that “an elder”. I even delivered speeches in the congregations in the USA. I was only 30, but the gap kept growing and growing till it became chaos.

We had always been taught that the Society of Jehovah’s Witnesses is the only true one and the spirit of God Jehovah is on it. When the body of elders takes a decision they pray and the spirit of God Jehovah guides them. For instance, when they deal with legal cases, if the sinner has truly repented, then he/she is not disfellowshipped (a word Jehovah’s Witnesses use to mean ‘expell’) but forgiven, just as repented David was forgiven. However, if the repentance is not true, then he/she is disfellowshipped. Who is responsible for taking this decision? We, of course, the body of the elders are in charge of such decisions. The spirit of God Jehovah will guide us accordingly. Yet, I never saw that. It was the chairman’s decision which dominated, or the decision of the ones who had the strongest character. The rest of us just said our opinion but nobody really took our opinion into account. So, when I had seen everything from within the myth started to collapse.

And time had it that I would ascertain this personally as well. My wife and I fell into a serious error. I really repented for that error. I was brought to a judicial committee to be judged by my co-elders. I was in tears and kept telling them that I had repented for my mistake. I had never committed another offence in the past. I referred to the example of David whom God forgave although he had committed horrible sins, an example that they used to call upon. They told me that I had not really repented and I had to be disfellowshipped. Didn’t the Holy Spirit tell them that they were wrong??

I appealed against that decision as I had the right to. I thought it might have been the committee who was against the holy spirit and the next committee might correct that mistake. The next committee came from another church to judge me and it was supposed to be independent. However, as it turned out they were all hand in glove, as we say. When you appeal, the first committee can be present but they cannot interfere. Yet, they didn’t let me speak. Of course, the decision was the same, disfellowshipping. And I really wonder: Didn’t the Holy Spirit tell the second committee that I had deeply repented?

I was disfellowshipped. I was sure by then that they had no connection to God. I decided to play their game until the end, until I managed to throw away all doubts. My behavior was exemplary for a year. I did everything a disfellowshipped has to do in order to be reinstated. I went to all the congregations with my books and paid attention. Nobody talked to me for a year. My friends avoided me, everybody fled away. The disfellowshipped are treated as if they have some sort of virus.

Six months later I applied for reinstatement, but they told me that although I was doing very well, I had to try a little harder. Perfect! Upon the year I applied again, and the elders answered that by then I had repented indeed and I had proved that with my actions throughout the year. Didn’t the holy spirit tell them that I was pulling their leg??????

They announced my reinstatement in the next congregation. Everybody came to hug and kiss me in the end and tell me how much they had missed me. But where had they been for a year? I don’t want friends like those. It was the last congregation I attended. I told them that I didn’t want to know them any longer, and asked them not to bother me anymore. A huge load departed from me. Unfortunately, I broke up with my wife, too. It was time for the great change. I had searched all the religions in the USA; I had even studied dodecatheism because I loved Greece, the country that could build Parthenons.

However, nothing could fulfill the gap inside me. I had always had seeds of Orthodoxy sowed inside me; I was charmed by the mystery, by the devoutness, by the monasteries. Whenever I went to Greece, I would visit monasteries; I felt serene there, I watched history live.

So, I took the great leap. Around 4 years ago, after 18 years in the USA I came back to Greece. I took the first chance to visit the monastery of Agia Lavra, which was a dream-to-come-true for me. I told to the monk at the door… “I want to be baptized an Orthodox”… and from that moment onwards what began was the most engrossing journey in my whole life, with those holy men I met who hugged me as though they had been knowing me for ages. I was baptized in a barrel where they put the must; we filled it carrying buckets of water. It was an exquisite night on 12-12-2009. I was born two weeks before Christ’s birth. The emotion was deep, the devoutness great. The monks were chanting and I could not stop the tears falling from my eyes. I stayed in the monastery that night and received Holy Communion the next morning. Finally, the gap I had been feelling inside me for my whole life was bridged. The wound was healed. Maybe God allowed all this time to pass by and all these experiences I had gone through so that I could really appreciate the best.

Last May I got married to a wonderful girl, the marriage took place in Agia Lavra of course. Six and a half months ago we had our first child, a gorgeous girl, who was baptized in Agia Lavra of course. Every Sunday we go to the Service. Every Sunday during the Service I start crying. I close my eyes, I listen to the monks chanting and I feel as if I’m flying. I travel in time… I think I’m in Byzantium and it’s magical… I don’t look for the Holy Spirit any more. I see it!!! When my friends see me they say that my eyes are shining and they’ve never seen me like this before. My wife says that when we leave the monastery, the moment we step out of the door that shining goes away. “Can’t you be like that at home as well?” she asks. No, because there I’m in heaven I don’t step on the ground. I had never felt those feelings before. I really wish to everybody to feel the way I feel; it’s majestic.

…In one Holy Catholic and Apostolic Church…