HELL AND PARADISE IN THE OTHER DOCTRINES 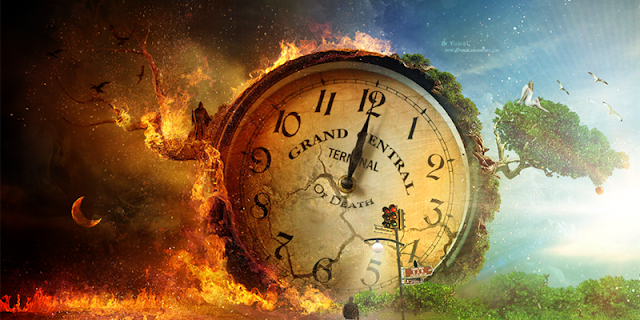 A lot of faithful Christians, having acquired Christian education, believe that the faithful of other religions have the same perceptions and the same preaching about Hell and Paradise. However, they are totally wrong as they will realise after reading the following article. Of course our article discusses this important issue only superficially and not in depth. Our intention by writing this article is to stimulate the reader to look for more information about this great issue on his own...


HINDUISM
Hinduism is the traditional religion of India and has been in existence for thousands of years now. This is why a founder of this religion has never been reported. For the people in India the world is separated into various ranks, ranging from inferior forms, eg plants and animals, to Gods. Human beings are somewhere in between and can be reborn by taking various forms (reincarnation). Instead of a soul they have ‘atman’ which means the deeper hypostasis of any being, a person’s true self. When the person dies ‘atman’ leaves the physical body in order to dwell somewhere elsewhere.  The place where ‘atman’ will dwell depends on what Hindus call ‘karma’, that is to say the actions or deeds that the person did when in life and the impact they had on one’s current circumstances, giving him positive or negative energy for good or bad actions respectively. Thus ‘atman’ (the soul in a way) can dwell in plants, animals or objects and therefore somebody who used to be a human being can now be a plant or an animal. This perpetual chain of the repeated succession of births, deaths and rebirths in which any individual is condemned is called ‘Samsara’. In other words ‘Samsara’ is for Hindus what Hell is for Christians. Hence ‘atman’ needs to escape from ‘Samsara’. Salvation (‘moksha’) comes with deeds, knowledge and devotion. The deeds a Hinduist has to do in order to be liberated, are sacrifices to the Gods and rites keeping the formalities by the book. And when one does all these then he is accepted by the Gods. For the Hinduistic thought sin is mainly ignorance. Hinduism does not wish to transform the world, but to help faithful to be released from this world, which is conceived as fraud – a delusion (‘Maya’) – and to delve into the real world which is the world of the impersonal Divinity and is called ‘Brahman’. In short, the surpassing of the world and the immersion into ‘Brahman’ constitutes what we call Paradise.
JAINISM
Jainism started as a branch of Hinduism, but as years went by it constituted a separate religion in India. Alike Hinduism, it does not have a founder. Strange though it may seem for a religion, Jainism does not accept the existence of God. For Jainism the world is divided into ‘Jiva’ (souls) and ‘Ajiva’ (inanimate, non-living). Karma (meaning the amount of deeds within the duration of the life of every individual), is regarded as a subtle form of matter. The matter provides karma with various bodies. All corporal beings have two bodies, the infernal one and the karmic one, which derives from the previous deeds and is attached to the ‘jiva’ (soul), determining the form that the soul will take: human, divine, animal or infernal.

Salvation (‘moksha’) is achieved through mental and moral discipline so that the soul is released from the material bonds and is able to reach ‘Nirvana’ – a state with a lack of composition and form – from which suffering and incarnation (what we call Hell) are absent and which is a life of eternal bliss (what we call Paradise ). Due to the fact that Jains do not believe in any omnipotent supreme being (‘Brachman’) as we have already said, individuality remains eternal.
SIKHISM
Sikhism (‘sikh’=disciple, learner) is a monotheistic religion that also sprang up from Hinduism. It is considered an effort – although its followers do not accept this – to compose Hinduism and Muhammadism within its teaching. Guru (teacher) Nanak (1469-1539 A.D.) is considered to be the founder of Sikhism. Sikhism accepts a supreme being, a god, that created the world and it believes in the brotherhood of people. It also accepts that this God is not only the cause of the material world but of souls, as well. It teaches that everything in existence is a form of God, a wave in the divine ocean. Because it has been influenced by Hinduism it regards the objective world as an optical illusion. Paradise and Salvation for Sikhism is the realisation by humans that God wishes to communicate with them and is revealed to them through reason. Whoever realises and comprehends this voice of God and answers with obedience achieves Salvation from this life, which is completed after death in ‘Nirvana’. Hell, on the other hand, is, as for Hinduism, when a person comes back into the troubles of life via reincarnation.

Buddhism began as a sect of Hinduism. The founder of Buddhism is considered to be Siddhartha Gautama (6th-5th century B.C.), who is commonly known as ‘The Buddha’, meaning ‘the enlightened’. According to him, the cause of all villains and of suffering in humans lies in human desire. However this human attitude is erroneous because of the temporary and changeable nature of all things. What is bad for humans, though, is that they do not have conscience of this reality. However, all humans can exceed the tragedy of life, since a state of Salvation from suffering does exist and is called ‘Nirvana’. The path that leads to ‘Nirvana’ is in between the selfish satisfaction of human passions and excessive physical exercise. That’s why it is also called ‘The Middle Way’. This way leads to consciousness which dissolves ignorance, and after it has been dissolved, the person is finally directed to ‘enlightenment’, which is a state of total peace and bliss. And here it’s worth making an essential clarification, we think. While as we noted above Buddhism sprang up from Hinduism, it did not adopt its central point, which is ‘atman’, something equivalent to our meaning of soul.  Buddhism rejects out and out the existence of the immortal soul. The self is a continuously changeable combination of natural and mental forces, and is constituted of five entities. A being comes into existence only when these entities are joined together. For Buddhism, ‘Nirvana’ – our Paradise – does not declare the extinction, the elimination of the self, since for Buddhism the self does not exist. It means the annihilation of the delusion of the self and simultaneously the elimination of the entities that are related to this delusion.

After the death of Buddha, Buddhism was split in two, Mahayana Buddhism and Hinayana Buddhism. The teaching in these two doctrines of Buddhism, concerning the salvation of the person differentiated. Hinayana Buddhism cultivated the ideal that salvation is achieved by ‘arahant’. That is, the one who was honoured to advance in knowledge and to achieve salvation from ‘Samsara’ – from the repeated births and reincarnations – exactly what Hindus regarded as Hell. And ‘arahant’ is the one who managed to do this on his own, without the help of anyone.

On the contrary, in Mahayana Buddhism, Bodhisattva replaces ‘arahant’. ‘Bodhisattva is the one who although he has become an ‘enlightened’ (Buddha), he refuses to enter into ‘Nirvana’ because he wants to save people. Hence, all people are able and should achieve salvation with the help of a ‘Bodhisattva’. Siddhartha Gautama – known to us as The Buddha – is believed to have been such a ‘Bodhisattva’.
CONFUCIANISM
Confucius (551-479 B.C.) is the founder of Confucianism. Most Western people believe that Confucius is God or someone with divine dimensions. Confucius, however, never claimed anything like that for himself; and he neither wanted to declare any new religion or any new religious system. Simply, when he became the governor of a province in China, he tried to apply a type of justice that would help people have harmonious relationships with each other. Thus, he accepted the ancient traditional religion of China, which was polytheistic and paganistic, and he stressed respect towards it. Confucianism teaches that after death those who are virtuous will continue to live as virtuous spirits in the atmosphere, and in particular in the places where they used to live as living beings and those who are evil will be punished with eternal oblivion, that is nobody will remember them.
TAOISM
The founder of Taoism is Lao-Tzu (6th century B.C.). For Lao-Tzu the universe is not interested in human business and the mission of the people and their sovereign is to find a way to live in harmony with the rhythm of the universe, so that human activity does not impede it with innovative efforts. During the Han Dynasty (206 B.C.-220 A.D.), Taoism is wide spread in China. Its aim is to lead faithful to eternal life. But, due to the fact that man is considered to be constituted only by matter, this eternal life is not regarded as the intellectual immortality of the soul, but as the immortality of the material body. How can this happen? As Taoism pronounces this can be achieved through various exercises, which will help the person gradually replace the mortal organs with immortal ones. So, there will come the time when the whole mortal body is replaced with an immortal one, whose flesh is finally constituted by precious matters. When the faithful reaches this point he becomes immortal, is risen up into the sky and dies at the top of a mountain. However this death is an illusion and is called ‘release from the body’. The faithful temporarily takes the form of a corpse while the immortal body is removed in order to live with the other immortals. This is achieved through physical, respiratory, sexual and alchemic exercises. That’s why they also prepared the elixir of ‘immortality’, which resulted in many people being poisoned. To sum up, Paradise for Taoism is the transformation of mortal to immortal, while Hell is the weakness of this transformation.

During the Tang Dynasty (618-907 A.D.), Taoism is influenced from Buddhism, and approaches the western aspect of Hell and Paradise.  Thus the publishing editions of the Daozang write about rewards for virtuous actions and punishments for every sin. There was a deity who noted down the various actions in the process of the life of a person and after his death it decided whether the person would be classified in Paradise or in Hell.
ISLAM
Its founder is Muhammad (570-632 A.D.). Due to the fact that Mohammedanism has been influenced by both Judaism and Christianity, it has almost the same perceptions about Hell and Paradise. It believes in the resurrection of the dead, in eternal life and in the final judgement. When this happens the sinners will be condemned and sent to Hell, while the righteous ones will be rewarded with Paradise. However, the Muslim paradise does not have the intellectual character it has in Christianity. Because of the deserted and arid places of Arabia where the first Muslim lived – and as a result their life was very frugal – they imagined a materialistic Paradise with endless indulgence and pleasure, and with foods which the faithful Muslim will enjoy. Thus, in various points in the Quran, their holy book, one can read about this materialistic Paradise. There will be rivers from waters and milk, as well as wine in abundance. Similarly, the faithful Muslim will enjoy rivers from honey and abundant fruits. Such pleasures will also be followed by beautiful virgin girls and young servants just like pearls, the well-known to most of us as “huries of” paradise. Those who were killed for their faith and for the spread of Islam will have a particular place in paradise.