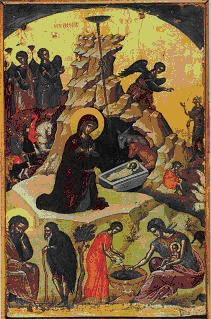 "The Birth of Christ" portable image Theophanes the Cretan, Stavronikita Monastery, Mount Athos, 1546
Speaking several times with multiple people, friendly or hostile to the Church, we found quite a few times, they had great ignorance and confusion about matters concerning Christ and Christianity. And it is worthy of admiration, that ignorance or confusion came more often than not uneducated people, but instead of educated people and high intellectual level...


When we want to identify the causes of this ignorance and confusion can say that usually are due to the following reasons.
The first and main reason is that many of these people, faithful or not, they have complete ignorance of the Bible and his religious knowledge is limited only to remember that from school. Another reason is that they confuse the real facts with the prevailing lore. Or watching various performances shown on images they think that the representations these accurately describe the events themselves.

EVANGELISM OF THEOTOKOS (THE ANNUNCIATION)
Classic example of the above is the fact of the Annunciation. There are not a few times that we have been recipients of irony - especially by people hostile to the Church - for this event. “You want to believe, they say, that the Virgin Mary became pregnant smelling the lily?” In our observation who saw it written, almost all answered, that have seen it in the Bible!
At this point, it is worth to mention that the Bible for particular individuals playing the role which we have called - the “rubber”. Just as the rubber stretches and you use it according to your will, and so they “stretch” the Bible to fit whatever things of their imagination and their desire!
For the restoration of truth, and a reference to the fact of the Annunciation, worth to say that the Bible does not mention that the angel went in that a lily, let alone that the Virgin Mary sniffed and got pregnant! Instead, as described in the Gospel of Luke chapter 1, verses 34-35, in the query of how Mary would become pregnant after having never known a man, the angel replied, “The Holy Spirit will come upon you and the power of God will cover you, which is why the holy child to be born will be called Son of God.” The faith that the Virgin sniffed the lily and became pregnant, is due to the confusion created by the representation of the Annunciation in western type images, which depict the Archangel Gabriel holding a lily, symbol of purity and chastity. Corresponding images in the Byzantine style the archangel holds a scepter. It symbolizes the power that God has given him to carry his will.

THE BIRTH OF CHRIST
Analogous confusion prevails on the facts of the birth of Christ. Most people namely believes that it is written in the Bible - insists already - the following:
• Christ was born on December 25.
• Year of birth the 1 AD.
• Currently he was born snowing and everything was covered with snow.
• The Magicians bowed the newborn Christ, on the night of his birth.
The answer to all the above is very simple, and we believe that will shock many people. Because the Bible does not mention absolutely nothing about these issues! Then from where and how it created the belief that?
In our attempt to answer, we need first to first to clarify what the Bible says about the first two events mentioned above. But it is worth to note, before turning to the Bible, that of the four [1] only two Gospels dealing with the birth of Christ and these are of Matthew and Luke.
So in Luke Gospel, chapter 2, verses 1-3 we read about the time of the birth of Christ as follows: “In those days happened to give orders from Caesar August to a census of the whole universe. This was the first census that took place when Kyrinios was liege lord of Syria [2].” And after Luke describes in the following verses that Joseph with Mary arrive in Bethlehem for the census, says in verse 7: “And she gave birth her son, the eldest born and wrapped him in swaddling clothes and put him in a manger to lie down, because there was no place in the inn were staying”. As we can ascertain, the Bible does not define neither the time nor the day of Christ's birth.

HOW IS DEFINED THE YEAR 1 AD
The year 1, that we consider as the date of birth of Christ and the beginning of our chronology has set several years after his birth. The adventure of this definition is as follows: In the 6th century after the birth of Christ, and more specifically in 525 AD, a monk of the West, Dionysius the Little (or Exiguus) [3], proposed to be replaced the then current system of dating with the system who he invented and it was based on the birth of Christ. Centuries later, the system prevailed throughout the Christendom and is what prevails and is valid until today.

HOW WAS DEFINED DECEMBER 25th
Something similar happened with the date of December 25, which is as we said as Christ's day of birth. And it is defined by the Fathers of the Church. Before we look at how defined the celebration of Christmas on December 25, we think it is necessary to update about something that ignores almost all the believers. Namely that for nearly 400 years, Christmas was celebrated on January 6! Initially i.e. the birth of Christ was set to be celebrated together with his baptism (Epiphany). This happened because the day of the baptism of Christ is like a kind of “birth”, since it sounds the voice of God the Father to recognize and endorses as God the person which baptized: : “Thou art my beloved Son, in you I delight” Luke Gospel, chapter 3, verse 22. So thought the Fathers of our Church, why not we celebrate the same day, two births? The one “birth” as God and other birth as a human being. And thus they defined the January 6 as the day of birth and baptism of Christ.
But later (4th century), the celebration of Christmas was separated from the Epiphany and was transferred on 25 December for the following reason : At the same date the peoples of the Roman Empire, the majority of whom were pagans, were celebrating the birthday of Mithra, one very dear to them god, of the god - sun of the Persians.
The festive events of the followers of Mithras were so rich celebration in order to drift to these and many Christians who were weak in faith. The Fathers of the Church, therefore, to antagonize this great celebration of paganism, made a very smart move.
Transferred the birthday of Christ from 6 January in 25 December, with the result those two celebrations (birthday of Christ and Mithra) to coincide. Moreover in doing so forced the Christians, weak in faith, to choose. Or they will be with Jesus or be with Mithras.
It is not the first time that the Fathers of our Church, take manners and customs of the pagan world - since they do not risk the substance and the dogma of Christianity - and give Christian color and meaning. Most are unaware that regarding marriage i.e. the wedding wreaths, the rings, the bridal veil, the bridesmaid's presence, etc., received them Christianity from Greek antiquity, as we said give them new meaning and content. (see encyclopedia “Papyrus – Larousse” in the word «marriage»).
The celebration of Christmas in December 25, was first launched in Rome by Pope Liverio the year 354 AD, and from there to East between 378-381 AD.
Direct information from Patristic source for the celebration of Christmas in January 6, we was transferred from the Ecclesiastical Father Clement of Alexandria. (around 210 AD).
Another source is John Chrysostom (344-407), which starting his speech about the birth of Christ, says that just 10 years ago, the Church in Antioch began to celebrate Christmas on December 25.

IT WAS SNOWING WHEN JESUS ​​BORN?
The prevailing impression now is that, when Christ was born it was snowing and everything was covered with snow. This is due to the following: In the countries where Christianity was spread in principle and constituted the known then world, December 25 is winter - because these countries are in the northern hemisphere - and usually snows. So the Christians believing that Jesus really was born on December 25, and ignoring what the Bible writes, believed that it was snowing at the moment he is born. But, as we have mentioned, the Bible not only writes nothing about snow, but instead shatters any idea about this. In the Gospel of Luke, chapter 2, verse 8 we read about the time of the birth of Christ: "In the same region there were shepherds who they stayed out in the fields and were guarding at night watching their herd". So the shepherds were crazy, taking out their herd in the snow at night, so they and their sheep to frostbite?

THE ADORATION OF THE MAGI
Another confusion relating to the birth of Christ has to do with the Adoration of the Magi. Many believe - influenced by the images and nativity scenes, showing the Magi with the shepherds – that the adoration of the Magi became the same night of his birth. Of course not. According to historians the Magi (the word is Persian origin, referring to highly educated people, especially in astrological and astronomical matters), coming from Persia, should be done three to six months to reach Christ. At this helps us once more the Gospel. Thus in Matthew, chapter 2, verse 11, we read: “And when they entered the house they saw the child with Mary his mother and fell into the earth and worshiped ˙ then opened their treasures and offered him for gifts, gold and frankincense and myrrh.” We see namely the magi to worship Christ at home and not at the manger of the inn, where he was born.
Moreover, a little below in verse 16 of the same chapter and Gospel, we see Herod commands to be slaughtered children under two years according to the time he ascertained from the Magi. The fact namely of the slaughter of children from two years and under - otherwise Herod would command to be slaughtered children below that age - is another indication that the Adoration of the Magi became long after the birth of Christ. Another point about the Magi is that we do not know the exact number of them. From the number of gifts we consider possible that they was three. His names are Gaspar, Melchior and Belshazzar, they have rescued from the "apocryphal" Gospels. (Not original texts of the Gospels. Was named thus because their authors claimed that they was derived their information from some secret sources to the many).
However whenever Christ he was born, that fact is one and grander, which you do not fit the human mind. That love of God is so immense that not only condescends to become a man, but also was sacrificed in a manner painful to save man from sin.

[1] The Gospels are four and not twelve as many think. The wrong impression created because the evening of Good Thursday is read twelve excerpts from them.
[2] Palestine where Jesus was born administratively belonged to the province of Syria.
[3] For the definition of year 1 AD, we are up short, because this is not only complex, but it needed and his article.